Suffolk County Legislator Kevin McCaffrey (R-Lindenhurst) recently attended the Annual Winter Meeting of the Barrier Beach Civic Association, which was held at the beautiful Old Town Hall. The meeting was well attended by the Association’s ... 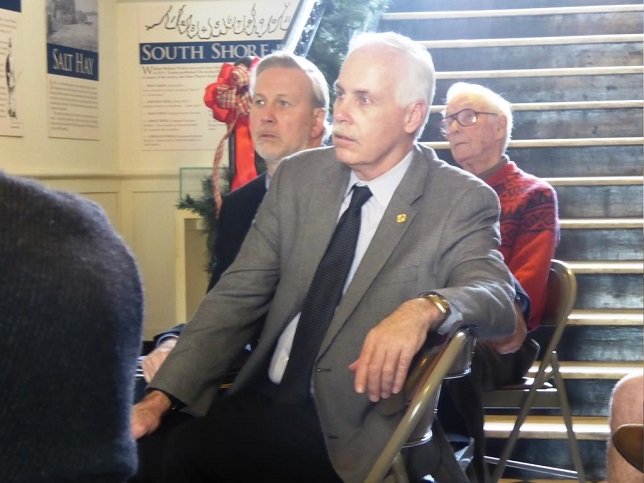 Babylon Village, NY - Janiary 14, 2016 - Suffolk County Legislator Kevin McCaffrey (R-Lindenhurst) recently attended the Annual Winter Meeting of the Barrier Beach Civic Association, which was held at the beautiful Old Town Hall.  The meeting was well attended by the Association’s members, all of whom were interested in learning about the priorities for the new year.

The barrier beaches were among the hardest hit areas during Superstorm Sandy, and the community is still reeling from the impact.  The infamous storm that mercilessly tore through the neighborhood highlighted the geography’s vulnerabilities and need for improvements to its infrastructure.  Chief among the concerns presented at the meeting was the lack of broadband internet services available in the area.

The absence of broadband (high speed internet) currently forces many residents to utilize expensive alternatives – which are not always as reliable – and puts them at a disadvantage when trying to secure critical information during emergencies.  For example, in the aftermath of Superstorm Sandy, having access to the internet was in some cases required to access certain disaster related information and/or services.

“Having access to things like reliable and high speed internet are no longer luxuries,” said McCaffrey. “Today, it is just as important to have this connection to the information superhighway as it was to have a landline phone in previous generations.  Securing these services on the barrier beaches simply must be part of any plan aiming to fortify the community against future storms.”

A representative of the Governor’s office was in attendance, and she indicated that a process has already been set in motion to bring broadband to the area as soon as possible.  Of course, the continued advocacy of the residents will play a significant role in expediting the arrival of a remedy.

“Organizations like the Barrier Beach Civic Organization are great vehicles for ensuring that the voices of the residents are heard by their elected officials,” added McCaffrey.  “They are also a great way to get to know your neighbors a little better.  I strongly encourage anyone who has a group like this in their neighborhood to both join and become actively involved.”

To learn more about the Barrier Beach Civic Association, you can visit their website.