Personal belongings of Natasha Jugo, 31, were found at Gilgo Beach, yet police contend that her disappearance is not related to the Gilgo Beach murders. 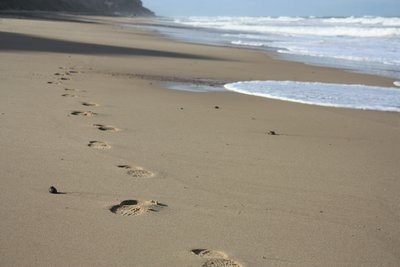 Suffolk, Nassau, and New York City police are all scouring Gilgo Beach in search of a Queens woman who went missing Saturday evening.

At 11:20 a.m. on Sunday, authorities received a 911 call from a Gilgo Beach resident who found a driver’s license and wallet near Ocean Walk on the beach, both of which belonging to Natasha Jugo of Queens Village.  Police from both counties and New York City were then called in to aide in the search.

Jugo was last seen on Saturday, when she left her home in the city at around 4:30 a.m. She was wearing a black robe, a gray hoodie, pink pajama pants, and a black coat.

The police identified a set of footprints leading from her abandoned 2009 Toyota Prius to the edge of the water.  A bathrobe and other clothing similar to what Jugo was last seen wearing was also found on the shore.

An aviation search was conducted by the Nassau Police Department, but nothing was found.

According to her mother, Jugo had spoken often of her fear that people were following her.

Jugo’s belongings were found not far from where the remains of eight women, five of which being prostitutes, were found between December 2010 and April 2011, but police claim that there is nothing to connect the woman with the infamous serial killings.

"There is no association," said Nassau police spokeswoman Maureen Roach on Sunday. "The only common denominator is the beach."

The Gilgo Beach murders have remained unsolved nearly three years later, upsetting locals and the families of the eight deceased women, as well as the families of a toddler and man whose remains were also found.  The only arrest that has been made in the case was of Akeem Cruz, the pimp of one of the women whose body was found on the side of the road in Gilgo on December 13, 2010. Cruz was charged with federal prostitution offenses, and is serving three years in jail.