Exhibit will run for month of August. 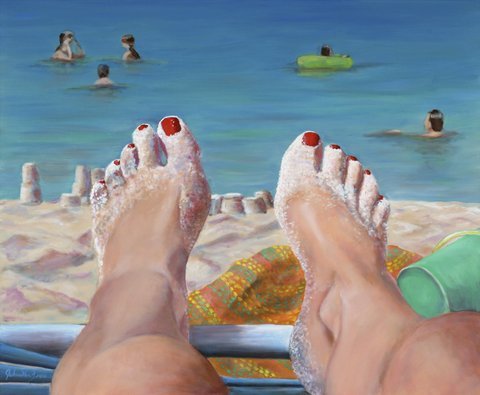 Brookville, NY - June 15, 2014 - Nassau County Fire Fighter's Operation Wounded Warrior is set to benefit from the art and photography exhibit "Endless Summer - Visions of Long Island" being hosted by LIU Post College - Library Association at the Hutchins Gallery in the Schwartz Library at 720 Northern Blvd., Brookville.
Curator and art consultant Jill Rader Levine selected over sixty of Long Island's most distinguished award winning artists and photographers to exhibit their works of art for the entire month of August 2014 at the Hutchins Gallery.
Members of the large art community of Nassau and Suffolk counties will be paying tribute to our nations wounded warriors as each of the participants will be making a very generous direct donation to the charity in addition to a portion of any sales of their artwork. The theme is summer on Long Island expressed in a wide variety of styles and mediums.
The exhibition will be professionally judged by Prof. Seung Lee of LIU Post College, Prof. Marc Kopman of the Hutton House Lectures/ LIU Post College and Dominick Totino - Official photographer for the Queens Borough President.
Artistic pursuits blend well with fund raising but also required the support of generous patrons who were willing to defray some of the costs of advertising the event and also gifts celebrating the achievements of the talented artists.
The project is being supported by many sponsors - an early listing includes Nassau Financial Federal Credit Union, Hicks Nurseries, Revel Restaurant of Garden City, Mim's Restaurant of Roslyn, Blick Art Materials, Bistro Citron in Roslyn, Wild Fig Restaurants, Berger Bros. Camera and nuBest Salon of Manhasset.
The exhibition opens to the public on Saturday, August 2,2014 and ends on Wednesday, August 27,2014. The gallery which is located on the lower level of the library is open from 1:00 PM to 4:00 PM Tuesday through Saturday.
A gala private artists reception ( by invitation only ) will be held on Thursday evening, August 7,2014 at 7:00 PM to 9:00 PM. It will feature a wine tasting presented by Stew Leonard's Fine Wines of Carle Place and desserts created by Sweet Tart Bakery Cafe of New Hyde Park.
Pictured: Colomba Furio -Spigner "The Dream, Kristie Arden "Ready For My Closeup", Joanne Von Zwehl "Two Feet", Jacques Le Blanc "Beach Hut."