Det. Luis G. Alvarez passed away in June 2019 at 53 after a battle with cancer stemming from his assignment at Ground Zero. 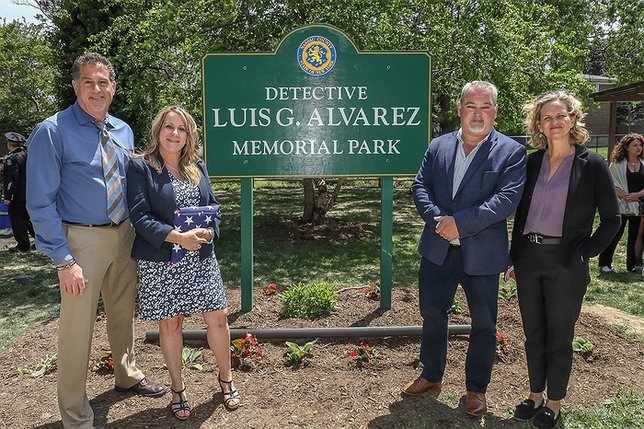 Nassau County Executive Laura Curran was joined by family of the late 9/11 champion Detective Luis G. Alvarez, elected officials, Nassau County Police Department, members of the NYPD and other distinguished guests to officially unveil Detective Luis G. Alvarez Memorial Park in Oceanside. County Executive Curran introduced legislation in August 2019 to rename Terrell Avenue Park as a tribute to the fallen 9/11 hero and since then the County has worked with the family to redesign the park.
“It is with great honor that we officially rename Terrell Avenue Park after the late 9/11 patriot and champion of first responders, Detective Luis G. Alvarez.  We owe Det. Alvarez an enormous debt of gratitude and it is my sincerest hope that this newly redesigned park will forever serve as a tribute to his life, a reminder of his sacrifice and a tranquil spot for his family, neighbors and community to enjoy,” said County Executive Curran.
Retired NYPD Bomb Squad Detective and leading champion for September 11th Victim Compensation Fund, Det. Luis G. Alvarez passed away in June 2019 at 53 after a battle with cancer stemming from his assignment at Ground Zero. Det. Alvarez transfixed the nation just weeks before his death with his testimony alongside activist and comedian Jon Stewart, to extend the September 11th Victim Compensation Fund Act. His advocacy resulted in the passage of the  “Never Forget the Heroes: James Zadroga, Ray Pfeifer, and Luis Alvarez Permanent Authorization of the September 11th Victim Compensation Fund Act” which provides funding through the year 2092.
The newly redesigned Nassau County park was dedicated in his honor to serve as a symbol and reminder of his sacrifice and unwavering fight for 9/11 first responders.