By Christian Abbatecola Published: May 27 2014

The last leg of the Triple Crown will be help on Long Island in less than two weeks, and the odds-on favorite is hard at work. 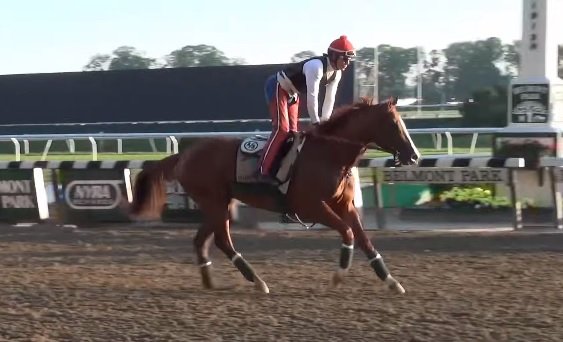 With the 146th Belmont Stakes just eleven days away all eyes are on California Chrome. The unlikely champion of both this year’s Kentucky Derby and the Preakness will attempt to become the first Triple Crown winner since 1978, when Affirmed became the eleventh horse to achieve that feat.

Since Affirmed’s victory eleven horses have had the opportunity to win the Triple Crown after placing first in both the Kentucky Derby and Preakness, but all came up short in the Belmont. In 2012, I’ll Have Another was on pace to end the long drought, but was ultimately unable to compete in the Belmont due to a tendon injury.

Being the first horse to win the Triple Crown in 36 years is no small task, and California Chrome has been hard at work preparing for the race that will take place on June 7 in Elmont.

“He just keeps getting stronger,” said assistant trainer Alan Sherman. “I can see it in his stride and the way he's taking hold of [exercise rider] Willie [Delgado], he seems to like this track. He's actually put on some weight since the Preakness.”

California Chrome has not been weighed, but Sherman later added that “We measure his girth. Before the Derby it was 71 inches; before the Preakness is was 71 inches. Now he's 72 inches.”

The additional muscle won’t be the only advantage the thoroughbred will bring to the track next Saturday, however, as it was announced on Monday that he would be allowed to wear a nasal strip during the race. The adhesive plastic will be placed just above California Chrome’s nostrils and use tension to hold his nose open wider. Increased airflow provided by the strip will not only help the horse breathe easier during the race, but can also reduce internal bleeding in the lungs—a common health risk among race horses.

Art Sherman, the father of Alan and trainer of California Chrome, says that the strip gives the horse “that little extra oomph that he needs, especially going a mile and a half.”

Seating and hospitality have already sold out for the race in Elmont, but Grandstand admission was still available through Ticketmaster as of the afternoon of May 27 for a price of $12.25 after fees.