Anthony Laccone, 57, kept the animals in uninhabitable conditions in a home filled with dirt and trash, Sini said. 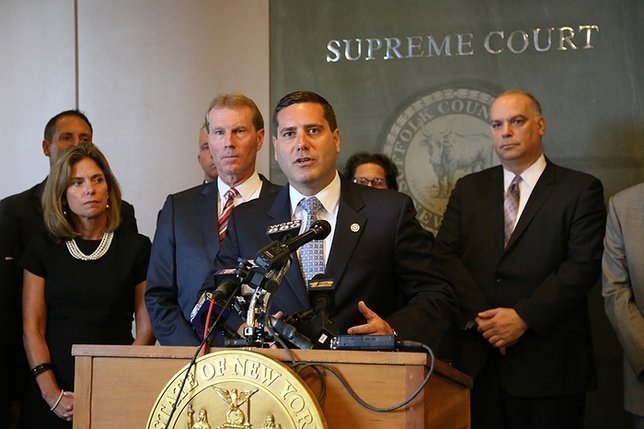 Suffolk County District Attorney Timothy D. Sini announced the conviction of a Copiague man for failing to provide proper sustenance to four dogs, causing two of the dogs to be euthanized.
Anthony Laccone, 57, of Copiague, was convicted by a bench trial of four counts of Overdriving, Torturing, and Injuring Animals; Failure to Provide Proper Sustenance, an A misdemeanor.
“This individual, without care or concern, severely endangered the well-being of four defenseless animals,” District Attorney Sini said. “This level of cruelty is sickening and hateful and will not be tolerated by my office.”
Between 10:30 and 11:30 a.m. on Nov. 30, 2016, the dogs were found by the Town of Babylon Animal Control and Suffolk County SPCA as they responded to a complaint. The defendant, Laccone, had failed to provide proper sustenance including food, water, veterinary care, and proper living conditions to four pit bulls. The animals were living in uninhabitable conditions as the home was filled with dirt and trash. Fecal matter covered the floors and walls which led to an overwhelming foul odor. Each dog was examined by a veterinarian at the Town of Babylon Animal Shelter and were found to be malnourished, flea infested, had skin infections, were soaked with urine, and had fecal matter embedded in their fur.
Two of the dogs were individually confined to a vehicle in the garage, each filled with trash and feces, and were found to have eaten through the seats of the car to fill their stomachs. Upon medical examination, these two dogs had to be euthanized. The other two have since been adopted.
Laccone was issued a field appearance ticket by the Suffolk County SPCA on March 30, 2017.
Laccone faces a maximum sentence of three years of probation on each count to run concurrently with mental health conditions. The defendant will have to register within five days of his conviction with the Suffolk County Animal Abuse Registry. He is scheduled to be sentenced by Suffolk County Court Judge John J. Andrews on July 25.
This case is being prosecuted by Assistant District Attorney Ashley Stapleton, of the District Court Bureau.