On Friday, hundreds of people holding American flags lined the street along Park Boulevard in Massapequa Park, honoring a Long Island Navy SEAL who was killed last week during a training exercise in Kentucky. 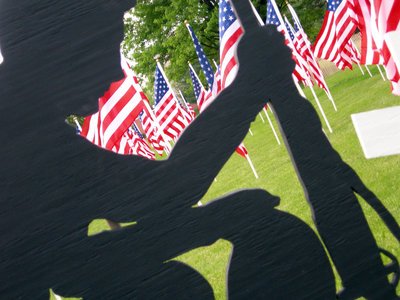 According to NBC News, military officials reported that Special Warfare Operator Third Class Jonathan H. Kaloust, 23, of Massapequa, died when a Humvee he was riding in overturned at Fort Knox. The Humvee was carrying six other Navy SEALs and two other sailors who were injured in the accident. They were treated for minor injuries and later released from a hospital.

Lt. David Lloyd, a spokesman for the Naval Special Warfare Group Two in Virginia Beach, Va., said the Humvee was part of a convoy on the post when it overturned Wednesday night. What caused it to flip remains under investigation, he said according to a Fox News report.

The sailors had been conducting tactical training, but Lloyd would release no further details about the sensitive military exercise. Naval Special Warfare Group Two oversees a variety of operations, including reconnaissance and counterterrorism.

Since World War II the U.S. Navy has used Fort Knox as a training ground. The 170-square-mile Army post is approximately 50 miles southwest of Louisville and is home to about 14,000 military personnel, including active duty members and reserves.

Kaloust, who joined the Navy in March 2011, was remembered at his funeral as a "born leader" who inspired others.

"Jon was a born leader, he was always someone others wanted to be like," said Al Bevilacqua, Kaloust's former high school wrestling coach. "Jon's just one of the exceptional kids, and I think the turnout you see from the community is an indication."

Other residents in the tightly-knit Massapequa Park community who didn't know Kaloust personally came out in support of his family and to honor his service.

"I put myself in his family's position and felt very bad for them. We have a very tight community here," said Kathleen O'Connor. "Honor him as he should be."

A caravan of mourners followed Kaloust's hearse to Long Island National Cemetery Friday where he was laid to rest.

Kaloust is survived by his parents and a sister.