Michael Grusel was taken into custody on Saturday. 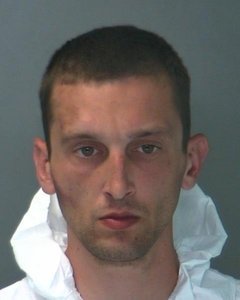 Suffolk County police arrested a man from Babylon on Saturday after he fatally stabbed another man near the Little League baseball fields on Locust Avenue in Babylon.

Michael Grusel (pictured) was arrested around 12 p.m. on Saturday following a dispute with 20-year-old James Moran that ended with Grusel fatally stabbing Moran.

A witness broke up the fight, and then saw that the victim had been stabbed. Grusel then attempted to flee the scene but was stopped by off-duty Suffolk County Police Officer Fred Bothe. Bothe was able to subdue the suspect with the assistance of nearby civilians. They then waited for officers from the First Precinct to take Grusel into custody.

Moran, of Cherry Lane in Bay Shore, was transported to Good Samaritan Hospital Medical Center in West Islip by EMTs from the Babylon Fire Department. He was pronounced dead upon arrival at the hospital.

According to Suffolk County Police, Grusel – 28 of Lewis Circle in Babylon – was taken into custody and is being charged with Manslaughter in the First Degree. He was held overnight on Saturday and was scheduled for arraignment at First District Court in Central Islip.