North Hempstead Goose Kill To Be Protested At Board Meeting 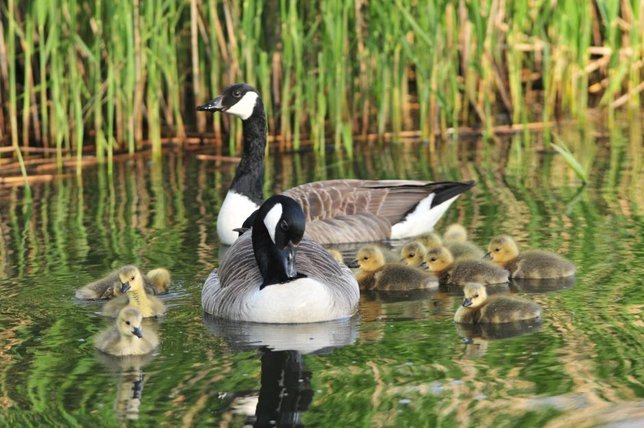 North Hempstead, NY — May 14th, 2013 — Friends of Animals, (FoA) an international animal advocacy organization founded in 1957 is pressing North Hempstead, New York officials to cancel plans to hire USDA agents to annihilate hundreds of Canada geese and newly born goslings in town parks.  FoA, in addition to residents and others will protest the kill plan and speak in favor of humane alternatives during the Tuesday, May 14th’s Board Meeting at the North Hempstead Town Hall, at 7:30pm, located at 220 Plandome Road, Manhasset, NY.   NY Newsday  reports on the town’s disastrous plan to spend $8,602.71 in tax dollars for the kill plan, in addition to $6 per goose to process the slaughtered geese who they absurdly claim will go to food banks after being gassed to death—in spite of reports that such geese are not safe for human consumption.

Edita Birnkrant, NY Director of Friends of Animals says, “Goose roundups are monstrous--USDA agents typically enter park areas during early morning, roughly separating goslings from parents, and then stuff the bound, panicked geese and babies into crates. Next, the geese are gassed or shot to death.” Friends of Animals challenges North Hempstead officials to imagine if such immorality is preferable to cleaning the grass and modifying some habitat and landscapes.

North Hempstead Parks and Recreation officials complain that droppings from the geese are a nuisance—yet there is no mention of the town utilizing machines available for commercial use which quickly and effectively remove goose droppings from grassy areas and parks—there’s no mention of any formal clean-up policy, in fact.”  “How can the town leadership ignore such an obvious solution in favor of a mass slaughter”, asks Birnkrant?

Town Supervisor Jon Kaiman and Council Members who ordered the killing need a different mindset, and a plan to clean up goose droppings in fields and parks.  Officials must make it a policy to clean up waste matter instead of saying all geese within town limits must die. Posting signs and enforcing no-feeding and littering rules are also sensible steps.

The town claims they’ve tried everything to “scare off” the geese, and that nothing worked.” Friends of Animals could have predicted that.  Harassing geese from areas won’t work if flat, grassy areas remain unchanged. Geese will move in when others leave, occupying those areas for nesting, especially in the summer.

Habitat and landscape modifications are environmentally sound, long-term ways to deter geese from areas where they are seen as problematic -- clearly what’s needed in North Hempstead. Co-existence with geese and other wildlife neighbors is required as a part of evolved suburban living. Are Supervisor Jon Kaimin and Town Council Members prepared to spend the residents' taxes each year to kill geese instead of implementing the effective strategies Friends of Animals endorses?

Geese are attracted to areas with short, mowed grass and open sight lines as safe nesting areas. Growing grass longer in areas, planting native shrubs and trees to block sight lines (geese like to watch for predators), will deter geese from ponds, shores and parkland -- reducing the time they spend in any one spot -- especially for the 6 week period in summer when they're molting.

The towns of Mamaroneck and Scarsdale, in Westchester, NY recently cancelled their plans to kill Canada geese in park areas after feedback and meetings from Friends of Animals and from outraged residents opposed to the killing—North Hempstead can and should do the same.  Friends of Animals is urging our members and supporters within North Hempstead and beyond to call and write Town Supervisor Jon Kaiman and Town Council member and tell them to cancel the mean-spirited plan to slaughter Canada Geese. We are also asking North Hempstead residents to attend the Tuesday, May 14th Town Board Meeting to speak out against this unjustified assault on wildlife and demand policies that protect and preserve wildlife.

Friends of Animals, an international animal protection organization founded in 1957, advocates for the rights of animals to live free, on their own terms.