The accident claimed the life of Alexander Zydel; Police are searching for three people in connection with a robbery. 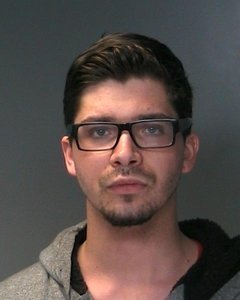 Zydel, of East Northport, was driving a 2003 Ford Explorer westbound on Soundview Avenue in Northport when his vehicle struck a tree around 12:55 a.m. Zydel was flung from the vehicle and landed on the road. He was then hit by a westbound driver in a light-colored sedan. The driver of the sedan fled the scene, and Zydel was pronounced dead at Huntington Hospital.

Suffolk County Police stated on Friday that they have made an arrest in connection with the accident. Ryan Bales, 24, of 41 Gildare Drive in East Northport was arrested by the Vehicular Crimes Unit and is being charged with Leaving the Scene of a Fatal Incident.

Bales (pictured) was held overnight at the Second Precinct and was scheduled for arraignment at First District Court in Central Islip on Friday.

Detectives are continuing their investigation into the incident, and asking anyone that may have been present at the scene or has any additional information to contact the Vehicular Crime Unit at 631-852-6555 or call anonymously to Crime Stoppers at 1-800-220-TIPS.

Three Wanted in Lakeview Mugging
Nassau County Police are searching for three people in connection with a mugging that occurred early Friday morning.

A 22-year-old victim was walking down Cleveland Street in Lakeview around 12:15 a.m. on Friday when he was approached by three black males. One of the men pulled out a black handgun while the other two removed property from the victim.

The three criminals fled north on Cleveland Street. No further physical description of the perpetrators was given.

Anyone with information regarding this robbery should contact Nassau County Crime Stoppers at 1-800-244-TIPS.  All callers will remain anonymous.