Subjects stole and attempted to use credit card fraudulently. 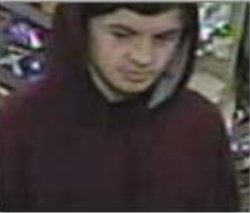 Bethpage, NY - April 29, 2014 - Crime Stoppers and the Nassau County Police Department are seeking the public’s help with identifying the unknown male subjects pictured above. The subjects are wanted in connection with a Grand Larceny that occurred in Bethpage, New York.
Between Saturday January 11th, 2014 at 9:00 PM, and Sunday January 12th, 2014 at 7:00 AM unknown person(s) entered the victim’s car that was parked on Farm Ranch Road East in Bethpage. The unknown person(s) ransacked the interior of the car, and took a pocketbook. At about 6:11 AM on Sunday January 12th, 2014 the two unknown subjects pictured above were caught on video surveillance attempting to use one of the victim’s stolen credit cards inside the 7-11 store located at 1 Farm Ranch Road in Bethpage.
Crime Stoppers is asking anyone who can identify the subjects, or anyone with any information about this case to call our toll free hotline:  1-800-244-TIPS (8477)