According to recent reports, the percentage of potential labor trafficking cases in Suffolk County is more than double the national average. 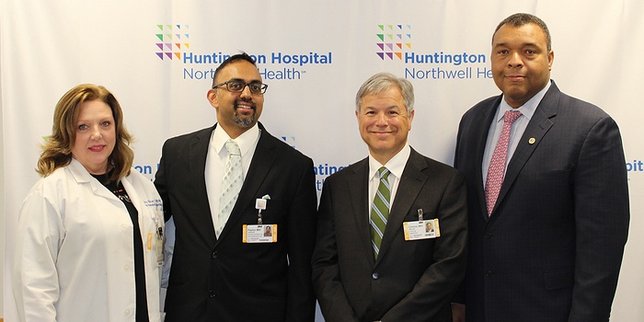 Huntington, NY - April 27, 2018 - With 88% of human trafficking survivors interfacing with the healthcare system without being identified as victims, Legislator William R. Spencer, M.D. has sponsored legislation to develop educational materials to aide healthcare professionals in recognizing victims of this modern day form of slavery.
Human Trafficking is a disturbing issue that is typically thought of as happening somewhere else. However, according to recent reports, the percentage of potential labor trafficking cases in Suffolk County is more than double the national average. Through working with healthcare professionals, the goal of the legislation is to help intervene and provide effective services for victims.
Back in February, Legislator Spencer invited Dr. Paulus, who initiated a Human Trafficking Task Force in Huntington Hospital, to come to the Suffolk County Health Committee and present on the issue. Dr. Paulus stated, “The Huntington Hospital Human Trafficking Task force has begun rolling out its training program to emergency department and Dolan Family Health Center staff that will help them identify the victims and survivors of human trafficking. Now, through partnering with Suffolk County on this mission, we will further our reach.”
“In looking at ways we can make a difference, Dr. Paulus wisely recognized that if we train healthcare professionals on the telltale signs of human trafficking, we can equip them to intervene and provide a path from victimhood to survival. There is an opportunity here to help make a tangible difference in people’s lives.” stated Legislator William R. Spencer, M.D.
“Victims of human trafficking are completely isolated from society by their captors,” said bill cosponsor Legislator Kara Hahn. “Oftentimes, emergency health professionals are the only people allowed by a captor to interact with a victim, so equipping them with information on human trafficking, ways to identify it and the resources available for those affected will undoubtedly lead them to the help needed to break their enslavement.”
“Within three months of receiving the human trafficking training, I helped the Huntington Hospital Emergency Department identify three cases of human trafficking, stated Judy Richter, LMSW at Northwell Health.
The legislation received unanimous support from the legislature at Tuesday’s General Meeting in Hauppauge. The materials shall be developed and distributed within 180 days of the effective date of the resolution.