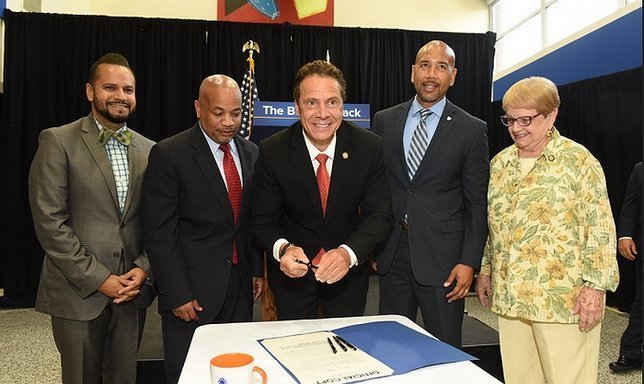 Albany, NY - April 24, 2017 - Governor Andrew M. Cuomo today announced a new week-long campaign to raise awareness of New York's Move Over Law, which requires motorists to drive with care, slow down, and safely move over when approaching law enforcement vehicles, firetrucks, ambulances, tow trucks, construction and maintenance vehicles that are stopped along roads across the state. The law was enacted in 2011 to protect New Yorkers working along the roadway and has since been expanded to include a wider range of emergency and hazard vehicles.
"New York has zero tolerance for reckless, dangerous drivers, and with the launch of this new campaign, state and local officials will help educate New Yorkers on the importance of moving over for first responders," Governor Cuomo said. "This campaign sends a clear message to motorists to obey the law, stay alert and help ensure the safety of men and women along New York roadways."
Beginning Monday, April 24 through Friday, April 28, variable message signs will display reminders across the state and informational posters will be hung at Thruway service areas in support of the campaign. On Friday, April 28 from 10 a.m. – 2 p.m., Thruway Authority staff, State Troopers, and tow truck operators will hand out flyers and engage in conversation with travelers to promote awareness about the Move Over law at service areas along the New York State Thruway (I-87 and I-90).
As part of the campaign, New York State Police Troop T will conduct a Move Over enforcement detail on the Thruway for motorists who fail to move over for emergency vehicles, tow trucks, and maintenance vehicles.
Additionally, to help promote the Move Over law, the Thruway Authority released a testimonial video featuring a colleague of Ronald Deming, a Thruway Authority construction heavy equipment operator in Herkimer County who was struck by a vehicle and fatally injured while assisting in the recovery of a passenger car along the shoulder of a roadway on October 28, 2016.
On Friday, April 28, from 10 a.m. – 2 p.m., representatives will be promoting the Move Over law at the following service areas along the Thruway:
Ramapo
I-87 southbound
Between exits 16 (Woodbury Toll Barrier) and 15A (Suffern – Rte. 17N)
Plattekill
I-87 northbound
Between exits 17 (Newburg – I-84) and 18 (New Paltz – Rte. 299)
New Baltimore
I-87 northbound and southbound
Between exits 21B (Coxsackie – Rte. 9W) and 21A (Berkshire Section/to Mass Pike)
Pattersonville
I-90 westbound
Between exits 26 (Schenectady – I-890) and 27 (Amsterdam – Rte. 30)
Dewitt
I-90 eastbound
Between exits 36 (Syracuse – I-81) and 35 (Syracuse – Rte. 298)
Chittenango
I-90 westbound
Between exits 34 (Canastota – Rte. 13) and exit 34A (Syracuse – I-481)
Clarence
I-90 westbound
Between exit 48A (Pembroke – Rte. 77) and 49 (Depew – Rte. 78)
Angola
I-90 eastbound and westbound
Between exits 57A (Eden-Angola) and exit 58 (Silver Creek – Rte. 438)
Thruway Authority Acting Executive Director Bill Finch said, "Our employees working on the side of the road are simply doing their jobs. At the end of the day, our crews want to go home safely to their loved ones. We must slow down and move over if safe to do so to make sure they do."
DMV Executive Deputy Commissioner and Acting Chair of the Governor's Traffic Safety Committee Terri Egan said, "It is so important that drivers move over if they can do so safely when they pass a police car, emergency vehicle, tow truck, or garbage and recycling truck. These workers are out helping others on our roadways, doing their jobs even in the most inclement weather, and their families want them to come home safe."
State Police Superintendent George P. Beach II said, "The New York State Police are committed to keeping our roadways safe - for those who travel them, and for those who work on them. We urge all drivers to slow down and move over when you see an emergency vehicle or maintenance crew on the shoulder of a road. Stay alert and put your electronic devices away. Troopers will be enforcing the rules of the road and violators will be ticketed."
New York State Department of Transportation Commissioner Matthew J. Driscoll said, "State highway construction and maintenance workers are out there every day making New York's roads and bridges safer. They depend on all of us to obey the speed limit and follow the rules of the road to keep them and everyone else out of harm's way. Governor Cuomo's Move Over law helps ensure safe passage for emergency responders, highway workers, and everyone else on the road. Traffic safety is a shared responsibility and we all need to do our part by not texting and driving, slowing down in work zones, and moving over for emergency vehicles."
In 2016, New York's Move Over Law was expanded to include volunteer firefighter and ambulance workers. The law previously applied only to law enforcement, emergency or hazard vehicles. The law now applies to vehicles with flashing blue, green, red, white, or amber lights. The expanded law gives law enforcement more authority to penalize violators who jeopardize the safety of those working along the highway.
The Move Over Law applies to both sides of the roadway, not just the shoulder on the right, and motorists caught in violation can face two points on their license and a minimum $150 fine for the first offense.