Projects To Establish A More Resilient Clean Water Infrastructure Are Set To Begin. 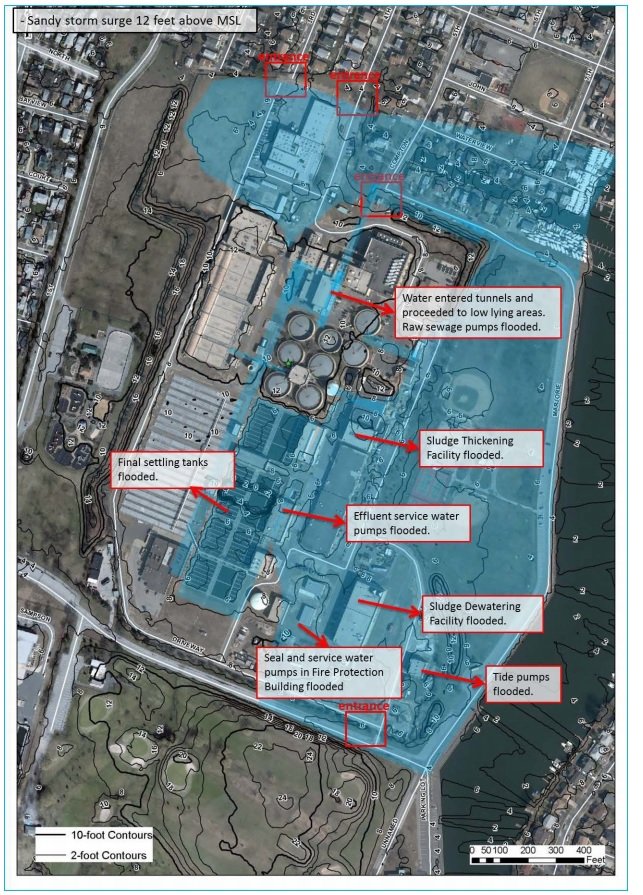 Albany, NY - February 11, 2014 - Governor Andrew M. Cuomo today applauded the progress toward repairing the badly-damaged Bay Park waste water treatment plant and called for additional funding for the ocean outfall at the Bay Park wastewater treatment plant. Nassau County Executive Edward Mangano joined the Governor in calling for additional funding to construct an ocean outfall pipe leading from the plant well out into the Atlantic Ocean to improve water quality in the back bay and protect extensive marsh islands that serve as a natural barrier to flood inundation.

"Superstorm Sandy hit Nassau County hard and we need to continue to work to build back better, stronger and smarter,” Governor Cuomo said. “We have already secured an agreement from the federal government to provide $810 million to repair and upgrade the Bay Park plant and collection system, and ensure the plant can withstand a 500-year storm event. We also have the opportunity to significantly improve water quality and resiliency in the back bay by constructing an ocean outfall pipe and are requesting additional funding for this important project.”

Nassau County Executive Edward Mangano said, “I applaud Governor Cuomo for his incredible efforts thus far in securing critical funding needed to repair the Bay Park Sewage Treatment Plant after the ravages of Superstorm Sandy. More than one year ago I joined with Citizens Campaign for the Environment, SPLASH and communities bordering the Western Bays to call for the construction of an ocean outfall. We will continue to work with our state and federal officials to make this dream a reality and ensure the long-term health of the Western Bays for future generations.”

The Bay Park WWTP currently discharges effluent to a shallow wetland and back bay area north of Long Beach Island. Moving the outfall well into the ocean will dramatically improve water quality, protect a large complex of marsh islands from nitrogen-induced damage and allow further assessments of possible nitrogen treatment requirements at the Bay Park facility to proceed while progress is made on these badly-needed projects. The marsh lands dampen waves and serve as an important natural defense barrier against coastal storm surges. The outfall could potentially cost between $600 million and $700 million.

Resiliency efforts have already begun. Engineering designs and bid packages have been prepared on the initial, major components of the Bay Park rebuild program, including the electrical distribution system and protective perimeter levees. Further efforts are underway to repair 31 major pumps to avoid the recurrence of sewage overflows into residential communities and to implement the Barns Avenue sewer interceptor repair. Future work at the plant will include rebuilding numerous complex treatment systems damaged by Sandy that are still vulnerable to failure.

The Governor has directed the New York State Environmental Facilities Corporation (EFC) to work with Nassau County to make zero-interest loans available so the County can undertake all repair and resiliency work as soon as possible. The loans are a critical bridge to the initial $810 million in federal funding, which will be provided as reimbursement for completed projects.

In conjunction with the potential ocean outfall project and to improve resiliency and water quality, the State and County will also explore the option of consolidating and removing highly-exposed barrier island wastewater treatment plants, such as the City of Long Beach's facility.

Currently the Bay Park plant treats about 50 million gallons of sewage a day and discharges to a marsh island/back bay area north of Long Beach Island.