Jean-Pierre: “As a community, we have the power to help put an end to senseless acts of violence.” 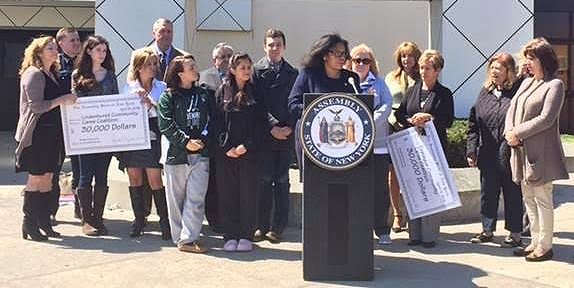 Assemblywoman Jean-Pierre announced she helped secure vital funding in the 2017-18 state budget to help prevent crime and violence in Suffolk.

Suffolk County, NY - April 13, 2017 - Assemblywoman Kimberly Jean-Pierre (D-Babylon) announced she helped secure vital funding in the 2017-18 state budget to help prevent crime and gun violence in Suffolk communities, as well as put our young people on the right path.
“As a community, we have the power to help put an end to senseless acts of violence,” Jean-Pierre said. “This funding will go a long way in doing that, and I’ll keep fighting to make our neighborhoods a safe place to live and raise children, and help our youth find better alternatives to create brighter futures for themselves.”
Jean-Pierre secured $50,000 for the Wyandanch SNUG program and $50,000 for the implementation of a North Amityville program. The program, administered by the Economic Opportunity Council (EOC) of Suffolk County, provides mentorship and teaches leadership skills to young people who are in gangs or are at risk of joining them.
She also secured $17,500 for the Council of Thought and Action, a grassroots organization operated locally by Suffolk County’s Deputy Police Commissioner Risco Mention-Lewis, which helps connect individuals in communities plagued by violence with opportunities and resources to get ahead. The funding was made available through the Edward Byrne Memorial Justice Assistance Grant Program.
To further protect local youth, the state budget includes a measure to raise the age of criminal responsibility from 16 to 18 and prohibit juvenile defendants from being placed in an adult facility. This year’s budget truly puts families first by implementing policies to help at-risk youth and contains vital funding to transform lives locally, noted Jean Pierre.