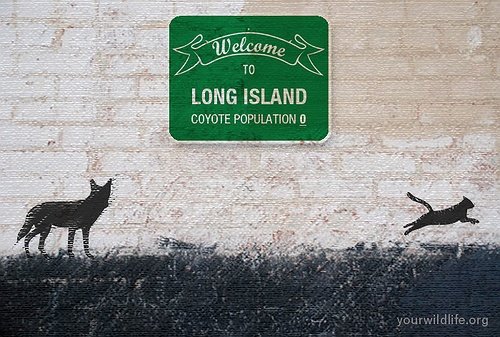 Long Island, NY - October 6, 2014 - Researchers at North Carolina State University are looking for volunteers who own indoor-outdoor house cats to participate in Cat Tracker, a new citizen science project to study the movement of cats using GPS technology.
The Cat Tracker research team, led by mammalogist Roland Kays, wants to know where cats go – and hunt – when they leave the house. Using GPS trackers affixed to harnesses, the team hopes to better understand the outdoor movement of owned cats and the potential threat they pose to native wildlife like birds and small mammals. Additionally, they want to understand how cat movement and behavior might be affected by the local presence of a top predator: the coyote.
Long Island (including Brooklyn and Queens) is of special interest to the Cat Tracker team because it is one of the only places in North America where coyotes don’t yet pose a threat to outdoor cats.
According to Kays, the team needs to recruit Long Island participants quickly. “It’s only a matter of time before coyotes colonize Long Island. There were a pair of sightings last year from animals prospecting for new territories,” he said.
Volunteers can sign up via an online form on the Cat Tracker website.
After completing a questionnaire to determine eligibility, participants will be provided a loaner GPS unit attached to a snug-fitting harness as well as instructions for tracking and downloading the data after the study is completed. There is no cost to participate.
According to Cat Tracker’s Long Island project coordinator, Riana Gayle, “We’re hoping to enroll at least 50 cats in the coming year. Cat owners will not only get to contribute to important scientific research, but they’ll get to learn some juicy details about the secret lives of their cats.”