U.S. Rep. Tom Suozzi (D-Glen Cove), who supports the THRIVE Agenda, met with those who attended the rally. 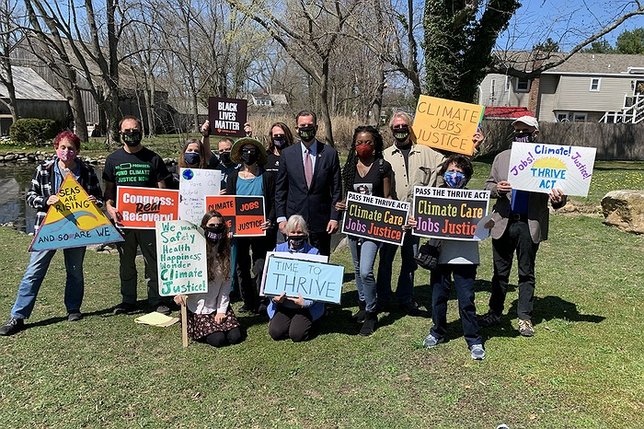 U.S. Rep. Tom Suozzi met with those who attended the rally at his office in Huntington.

Recently, dozens of activists and community leaders rallied at legislative offices across Long Island to call for the passage of the recently introduced New York Climate and Community Investment Act (CCIA, S4264A) at the state level, and to urge members of Congress to sign on to the THRIVE Agenda. Both legislative packages would help revive our economy while addressing the interlocking crises of climate change, racial injustice, public health and economic inequity.
U.S. Rep. Tom Suozzi (D-Glen Cove), who supports the THRIVE Agenda, met with those who attended the rally at his office in Huntington and thanked them for their continued advocacy.
Rallies were also held at Assemblyman Steve Englebright’s office in East Setauket; the office of State. Sen Todd Kaminsky, chair of Environmental Conservation Committee, in Rockville Centre; and outside U.S. Rep Kathleen Rice’s office in Garden City. The advocates urged New York legislators at all levels to take urgent action on policies that center climate, jobs and justice.
In New York, the CCIA would raise $10-$15 billion per year over the next ten years, paid for by a fee on corporate pollution. The money would be invested in solutions that would quickly and equitably draw down our state’s emissions while building a stronger, more just economy for all.
In addition to large-scale projects such as offshore wind, the CCIA would fund energy rebates, community projects like tenant-owned solar in frontline communities, public transit and efficiency for public housing and schools, and the transition of fossil-dependent workers and communities. The bill includes gold-standard labor protections, including prevailing wage requirements, and is estimated to create and sustain 150,000 jobs over the next decade.
The THRIVE Act, which will be introduced in Congress this month, is a transformational
economic recovery package that would put over 15 million people to work in family-sustaining, union jobs across the economy—from care work to manufacturing— to cut climate pollution in half by 2030 and advance gender, environmental, Indigenous, economic, and racial justice, with particular attention to Black and Indigenous people.
The rallies on Long Island — organized by grassroots leaders from NY Renews, Indivisible Nassau County, the Long Island Progressive Coalition and Our Climate — were part of the statewide Climate, Jobs and Justice action week, which has included more than 50 grassroots lobby visits and concludes Friday with a town hall featuring Sen. Chuck Schumer.