Bay Shore students will represent Suffolk County in the State Finals held in Albany May 21-23. 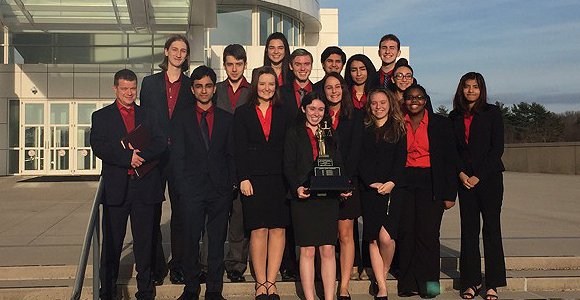 Long Island, NY - April 11, 2017 - This year’s High School Mock Trial Tournament was a tremendous success.  Over 450 students from 26 Suffolk County public and private high schools participated in eight weeks of competition. The participating High Schools this year were:
This educational program, now in its 26th year, is co-sponsored by The New York Bar Association’s Law, Youth and Citizenship Program, The Suffolk County Bar Association (SCBA) and The Suffolk Academy of Law (SAL) highlights the Bar’s commitment to public legal education and the important point of contact with our community. The tournament encompasses the valuable lessons of ethics, civility and professionalism; improving proficiency in basic life skills.
Judge Joseph Bianco presided over the championship round between Bay Shore and Ward Melville which took place in the Ceremonial Courtroom at the Alfonse M. D’Amato United States Courthouse on the afternoon of April 5, 2017.  This was the 3rd year in a row that these teams met in the finals, where Ward Melville won the first two tournaments.  After over two hours of argument, Justice Bianco told the students that their advocacy was “the highest caliber I have ever seen.”  He then announced Bay Shore High School as the winner and Regional Champion. The Suffolk County Regional Champion will represent the County in the State Finals held in Albany (May 21-23).
The Suffolk County Bar Association & the Suffolk Academy of Law extends their appreciation to the attorneys who participated as judges & team advisors, and to the judges who were on the bench for the semi-final and final rounds.
This program would not continue without the diligent work of our Co-County Coordinators, Glenn P. Warmuth & Leonard Badia. Together with their team, who assisted during the courtroom rounds: Alan Costell, Sean Campbell, Ellen Kramer & Paula Warmuth. Special thanks are given to Suffolk County Bar Association Executive Director, Sarah Jane LaCova and Suffolk County Bar Association President, John Calcagni, for their support and assistance ensuring this year’s program a success!
The SCBA and SAL extend their appreciation to: Warren Clark, District Executive, Hon. C. Randall Hinrichs, Administrative Judge for Suffolk County, Hon. Karen Kerr, Supervising Judge of the District Court, Eileen Mallon, Chief Court Officer of Suffolk County, Michael Paparatto, Kathy Meyer, Peter Ausili along with the Suffolk County Court Officers for their time and energy in assisting with this program.
The feedback that we receive year after year, by all who participate in the program  is the overall feeling of satisfaction and optimism in the future of our youth and our country.
Congratulations to all 2017 Mock Trial students and teachers for an amazing year!
To learn more about the volunteer opportunities for next year, please call the Suffolk County Bar Association at (631) 234-5511 x 229 or email cynthia@scba.org. Visit our website www.scba.org and like us on Facebook.