Inspired by separation, Oakdale’s Seth Buckley performed his song for friends and fans on Facebook and YouTube. 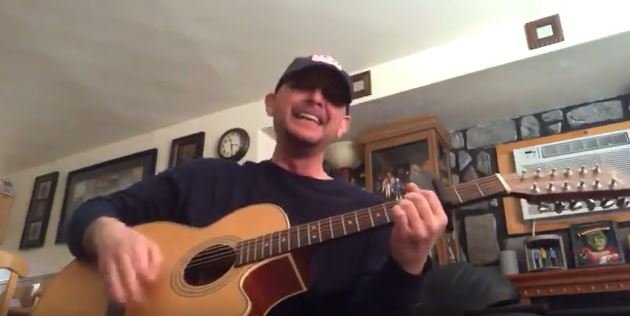 Photo: Seth Buckley performing his song "At the End of the World" on YouTube.

As everyone on Long Island becomes accustomed to sheltering-in-place there is a need for some to express themselves to make sense of this crisis or to provide a creative outlet for their feelings.

Oakdale’s Seth Buckley was inspired to put his feelings into a song while sheltering-in-place and separated from his girlfriend.

“The inspiration for the song came from the thought that if there’s martial law called or some kind of enforced lockdown I might not see my girlfriend again for a long time because we don’t live together,” he told LongIsland.com in an interview on Facebook.

While Buckley is probably keeping very busy at home - he is a single father with residential custody of two teenage boys, one of whom has autism - he said if things were to get any worse he would miss his girlfriend very much. That thought motivated him to write the words that he eventually put to music.

Buckley is no stranger to performing. He’s been in a few Long Island bands including Powertripp, Liquid Phase, and The Help Company.

Before social distancing and the closure of restaurants, Buckley, who says he is a fan of rock music spanning the 60s through the 90s, had been invited to do acoustical performances at a Starbucks on Sunrise Highway in Bohemia.

You can watch Buckley’s song “At the End of the World” on YouTube here.

This is one in a series of stories on LongIsland.com about creative Long Islanders and the art they are producing as they are quarantined during the Coronavirus pandemic.

A lot of times extreme circumstances can inspire creatives to make great art. With all this time on their hands quarantined at home, we wondered what kind of creative output was being produced by artists, musicians and writers were doing to deal with the pandemic. What are the creative types on Long Island making as they shelter-in-place, hopefully with access to the tools they need to make art?

Read our profile of Art Teacher Phillip Zirkuli and the car he decorated with inspirational art to honor the helpers.