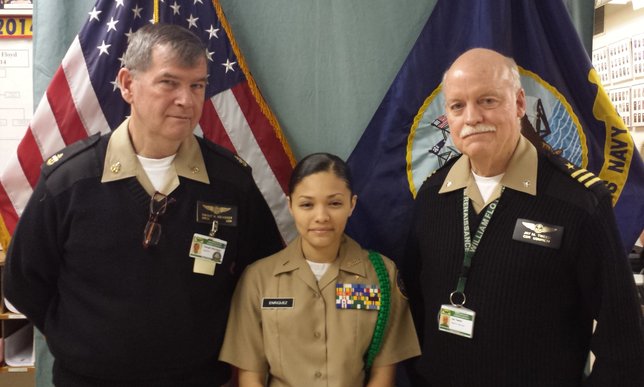 Mastic Beach, NY - March 31, 2014 – William Floyd High School senior and NJROTC cadet D’azia Enriquez just had a lifelong dream fulfilled – she has been accepted to the US Coast Guard Academy Scholars Program (CGAS), a highly competitive one-year preparatory program leading to a full appointment to the Academy’s class of 2019. This year, the CGAS tendered less than 100 appointments for prospective cadets from across the nation.

Enriquez, 18, of Mastic, NY, was also accepted to the Merchant Marine Academy for which she was nominated by Senator Kirsten Gillibrand. She also received a Merit Scholarship to attend Tuskegee University in Alabama, a four-year Navy Option Scholarship for the University of New Mexico and her application to the US Air Force Academy is pending (Nominator: Congressman Tim Bishop). But Enriquez is not waiting for a decision.

“The Coast Guard is my first choice,” said Enriquez. “I’m really excited about the opportunity to gain an appointment to the Academy and become a member of the class of 2019.” Enriquez comes from a family of service men and women: her stepfather is retired from the US Air Force, her aunt is currently enlisted in the US Air Force and her stepbrother is a 2009 graduate of the Merchant Marine Academy and is currently serving as a Captain in the Air National Guard.

“I’m thrilled that Cadet Enriquez received an appointment to the Coast Guard Academy Scholars Program,” said Commander Jay Tweed, William Floyd High School NJROTC. “Her hard work, talent and determination has paid off and will serve the Coast Guard well. I know that she will continue to make her family, school, community and country proud.”

During her time at CGAS, Cadet Enriquez will earn college credit, housing, subsistence and prep school uniform allowances in a regular monthly paycheck. Then, if all goes as planned, she will graduate with the US Coast Guard Academy Class of 2019 and serve at least five years as a commissioned officer on active duty. She plans on pursuing a degree in the STEM discipline of either electrical or mechanical engineering.

Last summer, Enriquez participated in the prestigious American Legion Ladies Auxiliary Girls State Program, a highly respected educational program of government instruction for high school students. She believes that this program helped improve her public speaking and self-presentation skills. A physics buff, who is ranked 20th in the William Floyd High School class of 2014, she recently participated in an International Physics Masterclass with Brookhaven National Laboratory (BNL), where she and some of her peers conducted high-level scientific experiments and presented their findings via a video conference with physicists at CERN (The European Organization for Nuclear Research) in Geneva, Switzerland. She is also a member of the American Legion Ladies Auxiliary, Arthur H. Clune Post 1533, Mastic Beach.

This is the second consecutive year that William Floyd has turned out a future military officer: Jeffrey Gao, a 2013 graduate and NJROTC member, was accepted and is currently attending the US Naval Academy in Annapolis, MD.