The Verdict is In: Support for Doing Away with the Plastic Bag is Overwhelming

t the General Meeting on March 22nd, the public hearing on a Local Law Prohibiting the Distribution of Plastic Carryout Bags Used in Retail Sales, drew dozens of supporters. 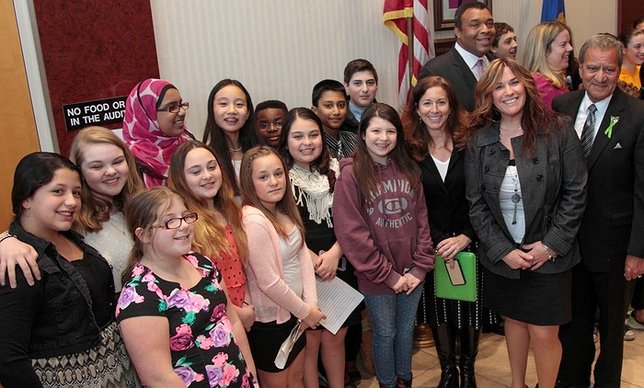 Hauppauge, NY - March 30th, 2016 - At the General Meeting on March 22nd, the public hearing on IR 1207-2016, A Local Law Prohibiting the Distribution of Plastic Carryout Bags Used in Retail Sales, drew dozens of supporters and made history as one of Suffolk County’s longest hearings, lasting nearly four and a half hours.

The overwhelming majority of speakers made it evidently clear that it’s time for Suffolk County to lead the charge for Long Island to go plastic bag-less, for the sake of our surface and groundwater, wildlife and future generations. The support for the bill was reported in Newsday’s article which stated 57 people spoke in favor and 5 were against the proposal.

The issue has effortlessly attracted a wide array of supporters, forming an impromptu coalition, including the business community with the recent endorsement by The Long Island Business Council and The Huntington Chamber of Commerce, the environmental community; including Citizens Campaign for the Environment, Seatuck Environmental Association, Long Island Environmental Voters Forum, Operation SPLASH and Wildlife Conservation Society, the scientific community, including the Safina Center at Stony Brook University, science students from Brentwood, Port Jefferson, Nesconset, Selden and Smithtown, the public with over a dozen civic associations and the support of local municipalities including Supervisors and elected officials from the Towns of Southold, East Hampton, Southampton, Brookhaven, Smithtown and the Village of Patchogue.

The bill, which has five co-sponsors, Legislators Spencer, Krupski, Lindsay, Fleming and Hahn was supported by a recent Newsday Editorial and the Long Islander Editorial. It won over 60% of the 1,632 votes cast in a Patch Poll, over 60% of those surveyed in a Citizens Campaign for the Environment supported taking action against plastic bags and over 95% of 940 students surveyed in the Great Hollow Middle School in Nesconset support a ban on single-use plastic bags.

In opposition to the proposal were special-interest lobbyists, Jay Peltz from Larchmont Village upstate NY, representing the Food Industry Alliance of New York State, Inc. and Julian Morris from New Jersey, representing the California based Reason Foundation.  Both claim that plastic bags do not litter our coastlines or pose a threat to our waterways and wildlife, despite volumes of scientific studies demonstrating the immense detrimental impacts of plastic bags.

Other opponents also purport the negative impacts to retailers; however, supermarkets within the many towns, villages, states and nations that have instituted plastic bag policies continue to operate and function to bring valuable services to their customer base.

In Suffolk County, Bravo, the small grocery store in Patchogue (where a ban is going into effect in September) has indicated that they expect to save $8,000- $10,000 per year on single-use plastic bags.  A recent lookback in history reminds us how supermarkets operated successfully before plastic bags were predominately used in the 1980s.

Legislator William R. Spencer, M.D., the lead sponsor of the bill, stated, “Decisions by local governments have boundary lines, but plastics do not.  It is up to us to be good stewards of our planet and protect our resources for the next generation.

Science is uncovering more information about the detrimental effects of plastic on our environment and health that will impact on us for years to come. As a county that is surrounded by beaches and bays and relies on our sole source aquifer for our drinking water, this bill is critical in protecting our shorelines, our water resources and the health of our residents.”

The bill follows a long tradition of initiatives in Suffolk County that value public health and the environment including: investing in sewer infrastructure upgrades, prohibiting phosphates in detergents, banning microbeads, prohibiting hydro-fracking waste in the county, and first in the nation legislation to ban the harmful chemical BPA in baby bottles, sippy cups, and cash register receipts. With similar intentions to protect the environment and reduce litter, Suffolk County enacted the .05 bottle deposit law in 1981.