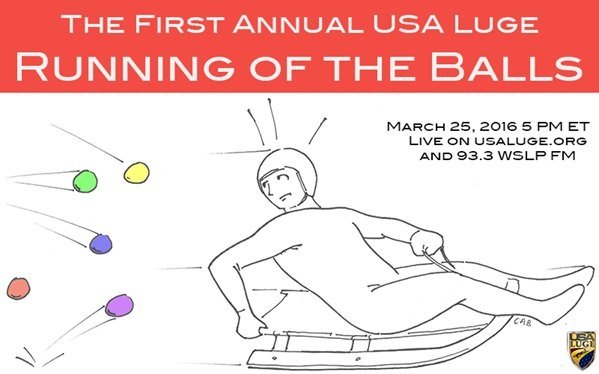 Lake Placid, NY - March 28, 2016 - The first annual Running of the Balls fundraiser, conducted by USA Luge to raise needed funds for its athletic programs, was an overwhelming success Friday at Mount Van Hoevenberg.
A total of 960 lacrosse balls raced down the one-mile course, purchased by the team’s fans, supporters and followers. There were 12 that ricocheted out of the track. Together with 22 regional sponsors, the event generated approximately $12,000 for luge’s national governing body.
“Never did we imagine that the first year would be this successful,” said Gordy Sheer, USA Luge Director of Marketing and Sponsorships and 1998 Olympic silver medalist. “And it was great to see so many people having lots of fun with the event itself. We thank all those who donated, sponsored and helped execute the first of many Running of the Balls.”
The event was broadcast live on the USA Luge website as well as 93.3 WSLP-FM in Lake Placid, accompanied by the station’s live stream.
As a side note, circumstances beyond the control of USA Luge lead to a delay and loss of a portion of the feed that occurred on the U.S. Olympic Committee’s Team USA web platform, which houses the USA Luge website. Balls were provided by Tri-Lakes Youth Lacrosse, Inc.
Here are the event results:
Earlier in the day, random prize winnings were drawn. There were four winners of CW-X gift certificates from makers of endurance engineered apparel and high performance athletic base layers. The beneficiaries were Chris Jacob of Jay, N.Y., Cheryl Hain of New York City, Bruce Norman of Fla. and John Tracy of Syracuse.
A large Traveler’s Choice luggage piece, the same model issued to the USA Luge National Team, was won by Michael Sawyer, of Geneseo, N.Y.
An autographed lacrosse ball, courtesy of lacrosse legend Paul Rabil, was won by Linda Pickering, of Lake Placid.
Another Lake Placid resident, Dave Ploof, was pulled as the winner of an 18-volt cordless Makita impact driver/drill/flashlight, courtesy of Lamb Lumber in Lake Placid.
As the inaugural event concluded, plans were already underway for the 2017 edition of this fundraiser.