USA Luge Announces the First Annual Running of the Balls 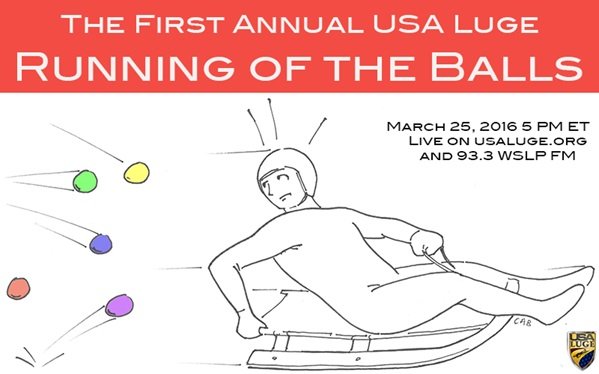 The event, on Friday, March 25 at 5 PM, will see hundreds of lacrosse balls, donated by Tri-Lakes Youth Lacrosse, flying down Lake Placid’s Olympic Sports Complex luge track at top speed. Fans will be able to participate in this unique event by entering as many balls as they’d like in this one-of-a-kind race that benefits USA Luge.

Cash, prizes from USA Luge sponsors and goods from local purveyors will be offered for the top five balls and the last place ball.

“With all due respect and apologies to Pamplona, USA Luge looks forward to the release of hundreds of lacrosse balls down the ice at Mount Van Hoevenberg,” said Gordy Sheer, USA Luge Director of Marketing and Sponsorships. “This will be a fun event as we wind down a great season for our athletes, and start looking ahead to next season, and especially two years from now, when we will compete at the Winter Olympics in PyeongChang.”

Prizes will be awarded as follows:1st place: $500

In the World Cup season that concluded Sunday, USA Luge set a team record with 19 medals. High finishes in the overall rankings added to the most successful World Cup campaign in team history.

Erin Hamlin, of Remsen, N.Y., Sochi Olympic bronze medalist and 2009 World Champion, finished fourth on the season, with Summer Britcher, of Glen Rock, Pa., in fifth place. Britcher tied for the most World Cup wins this winter with three and held the leader’s bib in mid-season.

The doubles team of Matt Mortensen, of Huntington Station, N.Y., and Jayson Terdiman, of Berwick, Pa., in just their second season together, finished fifth, an improvement of two places from 2014-2015. The Sochi Olympians had top finishes of fourth and fifth places on the World Cup tour.