USA Luge finished fifth, sixth, seventh and eighth in a pair of races on the first day of the World Cup season Saturday in Igls, Austria. 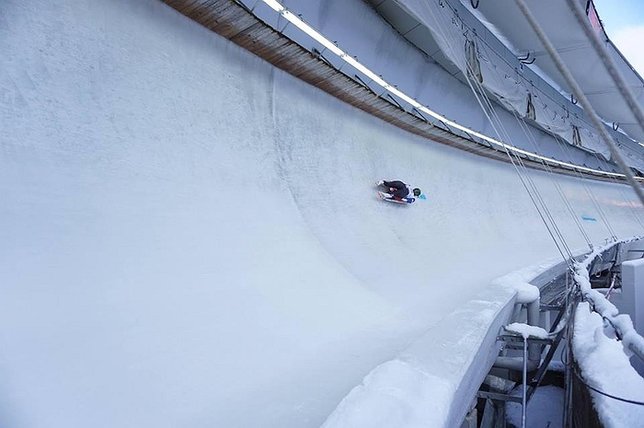 The World Cup luge season began in Austria this weekend.

Igls, Austria - November 28, 2015 - USA Luge finished fifth, sixth, seventh and eighth in a pair of races on the first day of the World Cup season Saturday in Igls, Austria.

“The first run I actually had a little trouble at the start but I was able to fix it right away, and had trouble out of curve nine,” said Britcher. “Honestly it could have been so much worse. I started skidding a little bit, but fixed it right away. It was one of the best fixes I’ve had. The second run was cleaner. I was able to move up a little bit.”

In winning for the second time in her career and second in a row, Eitberger set a first run track record of 39.827 seconds. The 24 year old finished with a heat time of 39.968 for a combined 1 minute, 19.795 seconds. She also took gold in last winter’s season-ender in Sochi.

Geisenberger, who has been nearly unbeatable since taking an Olympic bronze medal in Vancouver, rallied from fourth place in 1:20.009, with Canadian Alex Gough next in 1:20.017. Fourth place went to double Olympic medalist Tatjana Huefner, who has recovered from off-season Achilles surgery.

The story was nearly identical for the German doubles later in the day, with Toni Eggert and Sascha Benecken grabbing victory ahead of Austrians Peter Penz and Georg Fischler, with Olympic and World Champions Tobias Wendl and Tobias Arlt in third place. It was the Igls hat-trick for Eggert and Benecken as they have won here three straight years.

The USA’s Matt Mortensen and Jayson Terdiman, beginning their second season together, led three U.S. sleds by finishing eighth and may have been victimized by a late draw in slowing ice.

“Jayson and I have been sliding pretty solid from start to finish here, even from Lake Placid on,” said Mortensen, a 2014 Olympian from Huntington Station, N.Y. “The training we had coming into this week was great because it allowed us some time to focus on our starts and get them to where they needed to be for this race.

“I felt the runs in the race were okay. The second run could have been a little bit better. Our lines were a little bit out of synch on the bottom of the track. We had a pretty late draw in the first run. I felt the ice slowed down a lot, especially if you saw where some of the A seed (top 10) was after the first run compared to the second run.”

In addition to the ice conditions and the random draw, another issue is the length of the track, or lack thereof, on the course that lies on Patscherkofel Mountain.

Mortensen and Terdiman stated that the first eight seconds can dictate the outcome. In addition, the unit tends to gain time as the run gets longer. However, there is no such luxury in Igls.

“To put it into perspective, on the second run today, we were the second fastest top speed (going through the speed trap) at the bottom of the track,” added Sochi Olympian, Terdiman, of Berwick, Pa. “If the track were a little longer, we’d have made up quite a few hundredths (of a second) and probably would’ve jumped us up another spot or two.”

The way Sweeney began her final heat in the women’s race, the Suffield, Conn. luger could have used a longer course to overcome an error that saw her hit the right wall at the start. The miscue ended any chance at her first career podium finish.

She placed sixth in 1:20.149. “I'm oddly okay with how things went today,” said Sweeney. “I was really happy with my first run time, and honestly a little surprised. On the second run I hit at the start but recovered pretty well. My thought after that was to just go for it to try and make up the time I had just scrubbed off. Unfortunately, I went for it a little too much. I let the sled go too much in the labyrinth and paid the price. Overall, I'm happy because I showed that the speed is there and that's the most important thing moving forward.”

Three time Olympian, Sochi bronze medalist and World Champion Erin Hamlin rocketed into second place after one run, with Sweeney .03 of a second behind her teammate in third place.

Hamlin, of Remsen, N.Y. wound up seventh as snow fell in the second leg of the race.

“There really wasn't anything wrong,” said Hamlin. “Bad luck I guess. I must have hit the snowiest route down the track. The only sweep (of the track) they did was halfway through the run as far as I know. It’s very disappointing but what can you do?”

Mortensen and Terdiman’s eighth place clocking was 1:20.283. Jake Hyrns of Muskegon, Mich. and Anthony Espinoza of Park City, Utah, in their first World Cup race as a team, took 16th place in 1:20.710.

Justin Krewson of Eastport, N.Y. and Andrew Sherk, of Fort Washington, Pa., also in their World Cup debut together, were 17th 1:20.794. It was just Krewson’s second World Cup start, while Sherk previously raced with Hyrns. Krewson and Sherk had the fifth best run of the final round.

With the fastest individual heat times on the weekend determining the composition of the team, Krewson and Sherk will join Hamlin Sunday afternoon in the team relay.