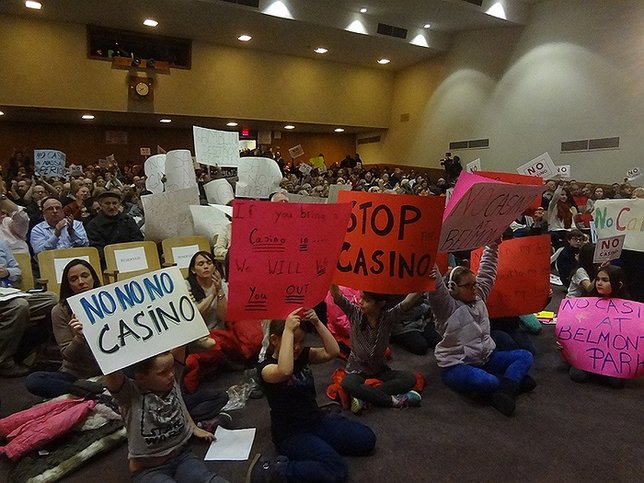 It would need the approval of the State Legislature because it would be constructed on public land. Like other pressing community issues, Kaminsky’s opponent, Chris McGrath, has remained eerily silent as he continues to ignore the concerns of Belmont’s neighbors.

“We cannot sit idly while unneeded VLT gaming threatens our quality of life and the well-being of our community,” said Kaminsky. “This misguided plan threatens the value of hard-working families’ homes, the streets our kids walk to school on, and the neighborhoods we love. I’m proud to stand up with so many community leaders and oppose this ill-conceived plan because this community deserves better than getting this shoved down their throats.”

Assemblywoman Michaelle Solages added: "A VLT Parlor is a regressive tax on Long Islanders surrounding Belmont Park. Degrading these families simply to fill a budget hole is irresponsible. I commend Todd Kaminsky for joining us in the fight for viable economic development on Long Island as well as making his voice heard on behalf of Nassau County residents.”

Floral Park Mayor Thomas Tweedy said, “I stood with Assemblywoman Michaelle Solages, Assembly Todd Kaminsky, Nassau County Legislator Carrie Solages and City Councilman Barry Grodenchik in joining many others at all levels of government in opposing a VLT casino at Belmont.  All in attendance appreciated Assemblyman Todd Kaminsky for taking a stance and standing with his local constituents”

Newsday has reported that Republican Nassau County Executive Ed Mangano is “relying on $20 million in casino revenue to balance his 2016 budget”, and the project has the support of the Republican Majority in the Nassau County Legislature. Kaminsky’s opponent, Chris McGrath, has refused to mention the issue at all during the campaign, and is remaining silent--even as the legislature prepares to either approve to disapprove the plan.