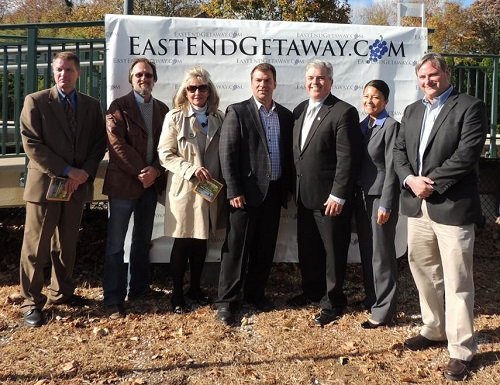 Mattituck, NY - November 6, 2013 - Suffolk County Executive Steve Bellone, the East End Tourism Alliance, and local officials joined to announce a “hop-on and hop-off” tourism transportation initiative that will allow visitors to take advantage of a wide range of regional activities and offers between Riverhead and Orient Point on the North Fork this Veterans Day weekend.

Following on the heels of the successful Columbus Day Weekend on the South Fork, which also offered free shuttle service, the East End Tourism Alliance will coordinate service on the North Fork during Veterans Day Weekend as part of a $335,000 Empire State development grant. The lineup includes special tastings, events, discounts and live music at the wineries. Special weekend discount offers will also be provided by hotels, bed & breakfasts inns, restaurants, hamlet shops and attractions, and there also will be great educational activities.

A free shuttle from Riverhead to Orient Point will be made available to visitors in partnership with the Hampton Jitney. There will be a Riverhead loop, for stops between Riverhead and Love Lane in Mattituck, as well as a Greenport loop, for stops between Mattituck and Greenport. The shuttles will circulate every 35-45 minutes with passenger access from the Long Island Rail Road station in Mattituck and Cross Sound Ferry terminal in Orient Point.

The event is also supported with expanded Long Island Rail Road service, which has agreed to extend its weekend service to Greenport beyond Columbus Day until the week after Thanksgiving.

Suffolk County Executive Steve Bellone added, “I would like to thank Governor Andrew Cuomo’s Empire State Development team and the East End Tourism Alliance for bringing this project to reality on the East End. The free shuttle this weekend gives tourists from both near and far the opportunity to visit our vineyards, farm stands, restaurants, shops and lodgings in a safe, convenient manner. It opens up our beautiful North Fork to an entirely new set of consumers who can help fuel our continued economic growth.”

In 2012, tourism was a $2.72 billion industry in Suffolk County and an estimated 38,447 jobs are generated from the tourism industry. After New York City, Long Island (Nassau/Suffolk) is the second largest region for tourism spending in New York State.

Bryan DeLuca, President of the East End Tourism Alliance and Executive Director of the Hyatt East End and Long Island Aquarium stated, “this effort has been a true collaboration between Empire State Development, The Long Island Wine Council, the North Fork Promotion Council, Hampton Jitney, the North Fork Trolley, the Cross Sound Ferry, the Long Island Rail Road and Suffolk County. This event gives us a truly unique opportunity to show the rest of the world the wonders of the East End.”

“The East End Tourism Alliance is an I ♥ NY success story,” said Gavin Landry, Executive Director of the Division of Tourism. “Governor Cuomo’s Long Island Regional Economic Development Council identifies boosting tourism as a key strategy for economic growth. As a result, the Alliance was awarded an Empire State Development Market NY grant, which they are now utilizing to drive tourism and spur economic activity throughout the region. We congratulate them on their accomplishments and the announcement of the Taste North Fork Campaign.”

“While a lot of people know of Long Island as a great summertime destination, there are many wonderful wineries, restaurants, cultural attractions and more available to visitors here year-round,” said Kristen Matejka, Director of Marketing at the Long Island Convention & Visitors Bureau. “The Taste North Fork program invites visitors to come out and enjoy the bounty of experiences on our North Fork including tastings, tours, and events. We hope people will be so enchanted by this special off-season program and activities that they’ll decide to take advantage of the special accommodations discounts also available and will stay the weekend.”

Steve Bate, Executive Director of the Long Island Wine Council, said, "This is something we've always wanted to try. If successful, the shuttle could eventually become a permanent feature with major benefits for our environment while opening up our region to one of the world's largest population centers with among the lowest car ownership. "

The North Fork has been named one of the top ten wine destinations in the world by Wine Spectator magazine. Over 1.3 million people visit vineyards in Suffolk County annually and there are 51 vineyards open to the public, 40 on the North Fork.

About:
The East End Tourism Alliance (EETA) was formed in 2008 as a non-profit membership corporation under the laws of New York. Its purpose is the promotion of the East End region as a travel destination for visitors, meetings, weddings, seasonal vacations, also day trip and overnight stays.