Creation of Safe Center LI, a unique organization housed at the former Grumman site that is expected to give Long Island one of the nation’s premier facilities serving the victims of abuse announced. 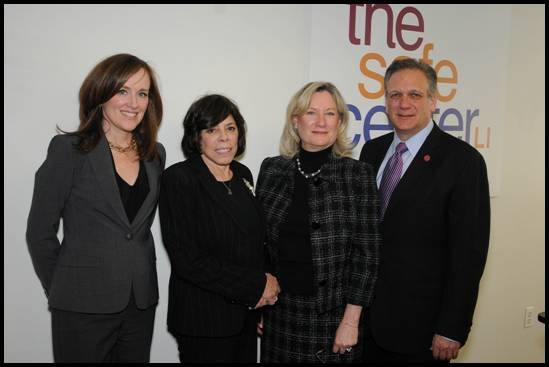 “For more than 35 years the Nassau County Coalition Against Domestic Violence and the Center for Child Abuse and Neglect have worked to help victims of domestic and family violence,” said Nassau County Executive Ed Mangano. “Their ability to even more effectively respond to preventing domestic and family violence has now been strengthened by formally merging their programs into The Safe Center Long Island, which has become a national model for multiple health and human service agencies to collaboratively combat family and domestic violence.”

Created through the merger of the CADV and the CCAN, the Safe Center LI creates a single location where, for the first time in our area, an abuse victim can get all the services needed under one roof and through a single agency. The Safe Center LI also houses a Nassau County Multidisciplinary Team comprised of the Police Department’s Special Victim’s Squad, Social Services’ Child Protective Services Units, Nassau University Medical Center’s Suspected Child Abuse and Neglect Unit and the District Attorney’s Office.

The official opening of the Safe Center LI completes a three year period where the founding agencies shared their location and took the innovative merger through the practical realities of fiscal, strategic and programmatic planning.