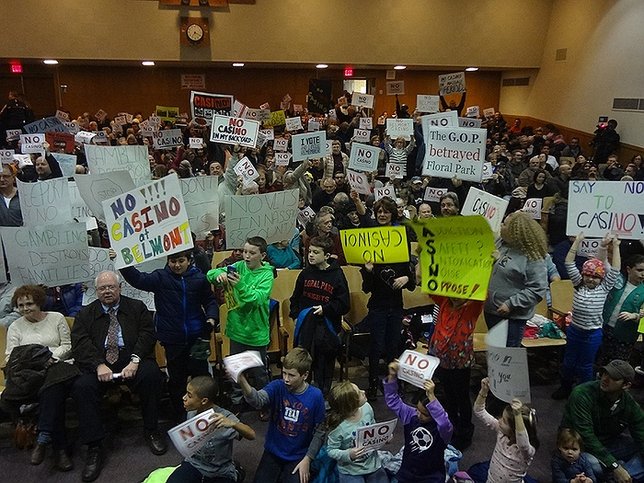 Nassau Off Track Betting (OTB) keeps running into a problem- no one appears to want their casinos in their neighborhood.

Over 2,000 local residents – many quite vocal and brandishing signs – crammed themselves into the auditorium of Floral Park Memorial High School on January 12 for a lively rally to passionately protest OTB’s proposed construction of a 100,000 square foot video gambling parlor within Belmont Lake State Park, just a short walking distance – under a half-mile – of area schools.

In the past several years, OTB has attempted to open casinos featuring Video Gambling Terminals (VLTs) in various locations throughout Nassau County, including the former Fortunoff’s location in Westbury and on the grounds of Nassau Coliseum in Uniondale; each time, public outcry over anticipated increases in crime, traffic congestion, and overall safety concerns have driven OTB out. 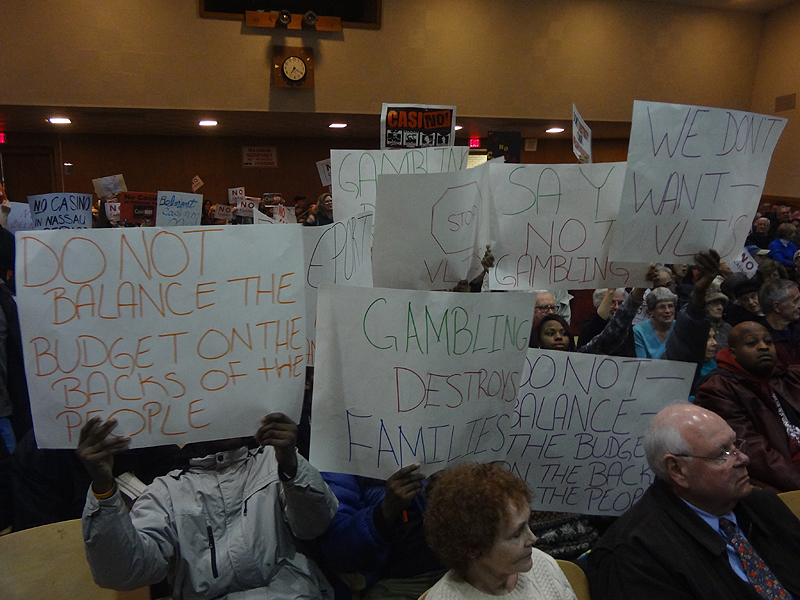 Now OTB has their sights set on Belmont Park, and if the outcry expressed by the residents at the Floral Park rally – organized by the newly-created Belmont Park Task Force, a community group opposed to the casino – was any indication, OTB is set to have their hands full once again.

Floral Park Trustee and Chairman of the Belmont Park Task Force Kevin Fitzgerald, one of the speakers at the rally, thanked the residents of Residents of Floral Park, South Floral Park, Bellrose Terrace, Bellrose Village, and Stewart Manor from the auditorium’s stage for attending the “Say No to the Casino” rally, saying that their opposition to the OTB project will be heard by lawmakers and elected officials.

Fitzgerald noted that, after New York State passed a bill in 2013 to allow casino gambling within its borders, residents of Floral Park voted 2-to-1 against casinos anywhere within the state, and particularity not within the confines of their own neighborhood.

“Tonight is about letting the voices be heard that came out and voted against the casino,” he said. “Tonight, thanks to resident’s concerns, we have put together a tremendous group of speakers who are going to come out and talk to you about the concerns we all have and the reasons we do not want a casino.” 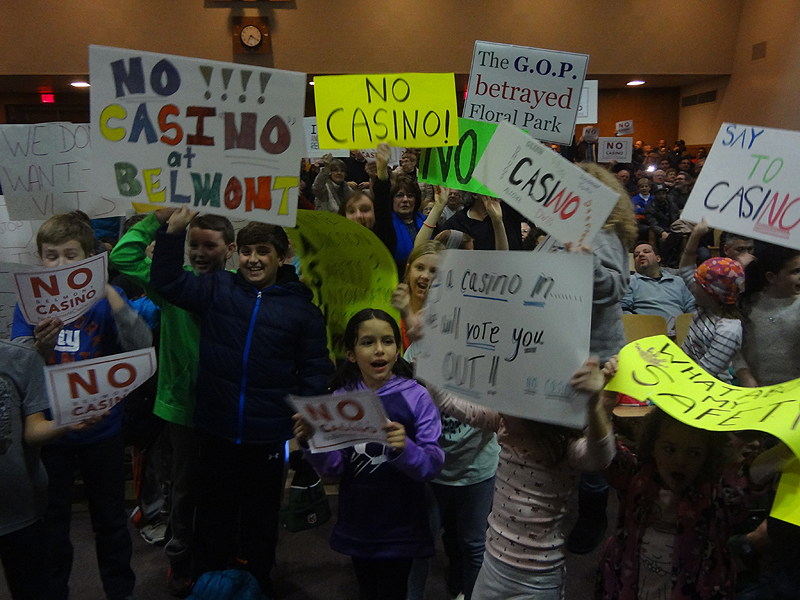 Laura Ferone, President of the Floral Park-Bellrose School Board of Education, decried the fact that OTB’s proposed video gambling parlor, if allowed to come to fruition, will be far too close to both the elementary school and the high school for comfort; Belmont Park is directly across the street from the high school, Ferone noted, and practically in the backyard of the elementary school.

“I stand here representing 1,597 students, ages four through twelve, whom we serve…our elementary school is one of the largest in Nassau and it lies adjacent to Belmont Park, and all that separates our playground from the Belmont property is a chain link fence. On any given day up to 300 kids are playing on that field just eight feet from that fence,” she said. “We’ve been told by OTB not to worry…that they casino is not even close, that’s it’s a half-mile from the school. But a half-mile in Floral Park distinguishes whether you ride the bus or walk to school…a half-mile is too close for our children.”

U.S. Congresswoman Kathleen Rice was invited to attend the event but was unable due to prior commitments; event MC Bernadette Smith of the Belmont Park Task Force read a statement Rice had sent, reinforcing her support in the public’s fight against the casino.

“Residents and community leaders in my district have expressed serious and well-rounded concerns over plans for a video gambling parlor at Belmont Park, and I share those concerns, and I feel that this project is not in the community’s best interests,” Smith read from Rice’s statement. “This decision-making process lacks transparency and fails to include any input from residents, giving them all the more reason to feel that this facility is being forced into their backyards by people who won’t have to live with the consequences.” 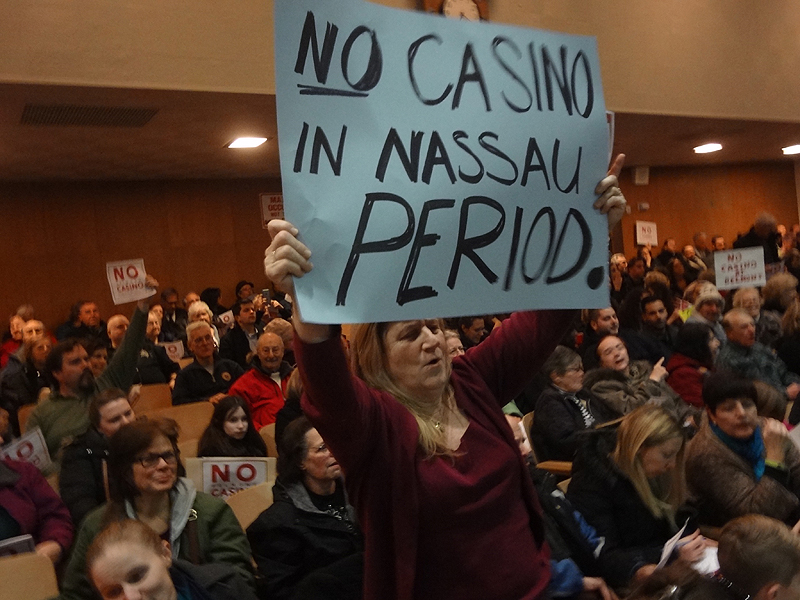 Thomas Tweedy, Mayor of Floral Park stated that he and administration had held meetings with Nassau County Executive Edward Mangano where the concerns of the people were expressed; many in attendance at the rally believe that the county is pushing for the casino to be built in anticipation of revenue the cash-strapped municipality will receive.

“At this meeting, we asked the County Executive what the financing arrangement was…there was none. We asked what the current plans are for the construction…there are none. A 100,000 square foot casino and there’s no plan for it,” he said. “Based on this, I truly believe that this is a very long way off. There is not a current timetable or date for this project yet…it is just a proposal. However, we must remain vigilant, we must remain committed…we need to understand the information that comes, and we need to dispel the myths.”

Tweedy noted that VLTs are known as the “crack cocaine” of the gambling world, and that that their societal impacts consist of gambling and alcohol addiction; he also expressed fear of traffic congestion in the area that would have a detrimental effect on both residents and police and fire department personnel responding to emergency calls.

Nassau County Legislator Carrie Solages compared the will of local residents rising against the proposed casino to the spirit of famed civil rights activist Dr. Martin Luther King Jr. and the hard work he did in his time in the name of justice.

“This is an important lesson for the many children here tonight to learn…what Dr. King was concerned about was what good people do when evil things happen,” he said. “We can’t look away, we have an obligation to make our community a better community…contact your county legislators and let them know that you don’t want this casino in your neighborhood.” 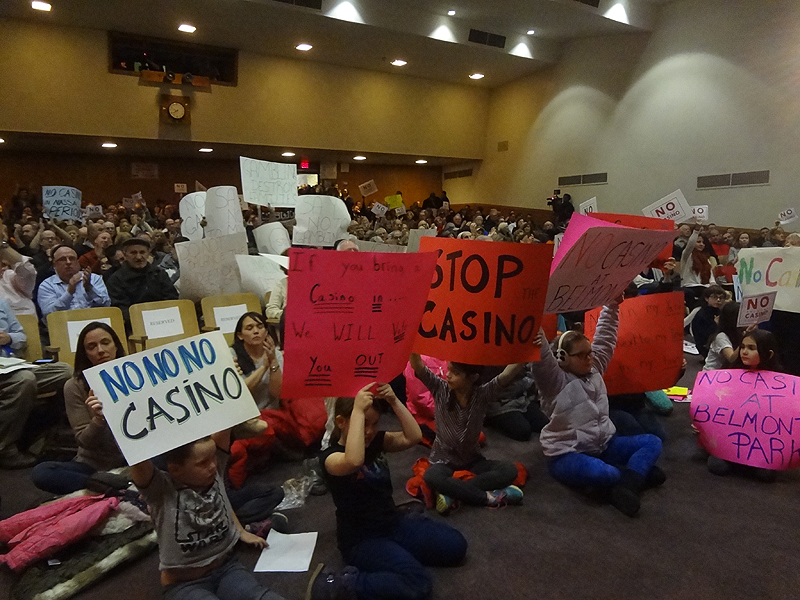 Betty Sullivan of Stewart Manor was one of the over 2,000 locals who attended the rally; one of the more vocal proponents of the OTB casino, she said that its inclusion in her community would lower the quality of life and create a hazard for herself and her neighbors.

“This is a disaster…OTB tried to open a casino at Nassau Coliseum in Uniondale, Hofstra University complained it was too close to their campus and OTB was shut down. And this casino would be closer to our schools than the Coliseum one would have been to Hofstra,” she said. “If allowed, this will increase traffic, it will increase crime, it will increase violence…I want no part of it here or anywhere on Long Island.”Tim Drake of South Floral Park echoed those sentiments, stating that OTB and their VTLs were not welcome in his backyard.

“Nope. I don’t pay all these taxes to worry about a casino opening up near my kid’s school and creating a hazard, driving up crime and lowering my property values,” he said. “Look at how many people are here that are against this…it’s overwhelming, and we’re not going to allow this. OTB should just give it up, as anywhere they go, they’re going to encounter resistance like this. Decent neighborhoods don’t want them around.”