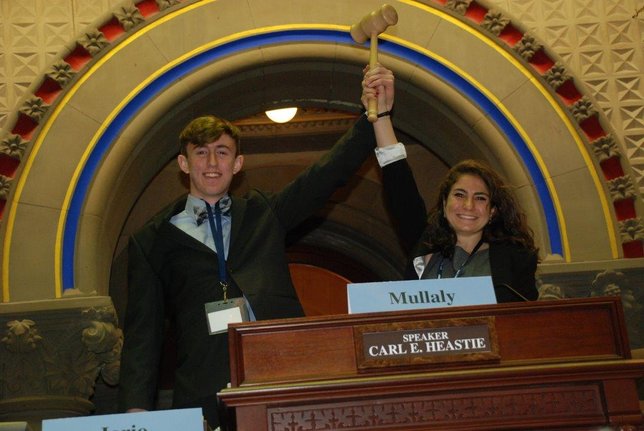 Each March approximately 600 students from all across New York State converge on the state capitol to engage in a simulated government inside the actual legislative chambers. William Floyd has two alumni currently serving in elected office – United States Congressman Lee Zeldin (Class of 1998), who was a member of the William Floyd Youth & Government Club, in which he served as Lieutenant Governor; and Brookhaven Town Councilman and Deputy Supervisor Daniel Panico (Class of 1996). Edward Hennessey (Class of 1979) has also served in public office on the Brookhaven Town Board and in the New York State Assembly.

“William Floyd consistently puts forth top performances at the annual Youth and Government conference,” said Dr. Paul Casciano, Superintendent of Schools, William Floyd School District. “It never ceases to amaze me how our students take a majority of the leadership positions and a host of awards every year. Their hard work, dedication and passion for public policy and the workings of government is a testament that our future is in good hands.” Dr. Casciano also added a special thanks to their advisors and dedicated mentors, Robert Feeney and Patricia Costell.

“The William Floyd Youth and Government Program is a valuable program that provides students with the opportunity to learn more about state government and policy through a unique hands-on approach,” said Congressman Zeldin. “This is where I got my first view of politics and is a very important reason why I am serving in the United States Congress today. It's great to see the program successfully continue and I look forward to many more years of Youth and Government’s continued success positively impacting our local community.”

“The William Floyd Youth and Government program is a perennial powerhouse,” said Councilman Daniel Panico. “I congratulate these fine young men and women on another outstanding performance. They are the future leaders that will make this community and country prosper. As a William Floyd graduate, I am very proud of their accomplishments.”

William Floyd also had several nominees for the YMCA Conference on National Affairs: Leah Antovel, Shannon Beattie, A.G.Chancellor, Kelci Henn, Anupam Mahadeo, Sarah Mazzarella, Victoria Panicola, Emma van Nieuwenhuizen and Christy Zegel, were all selected as candidates to attend the 10-day, nationwide summer conference which primarily focuses on gaining awareness of issues of national concern, as well as increasing an understanding of the federal government and its relation to state, national and international affairs.

Christy Zegel presided over this year’s Youth & Government conference as Governor. She was elected to the post at last year’s conference.