A piece of the historic Kings Park Psychiatric Center was taken down this afternoon. 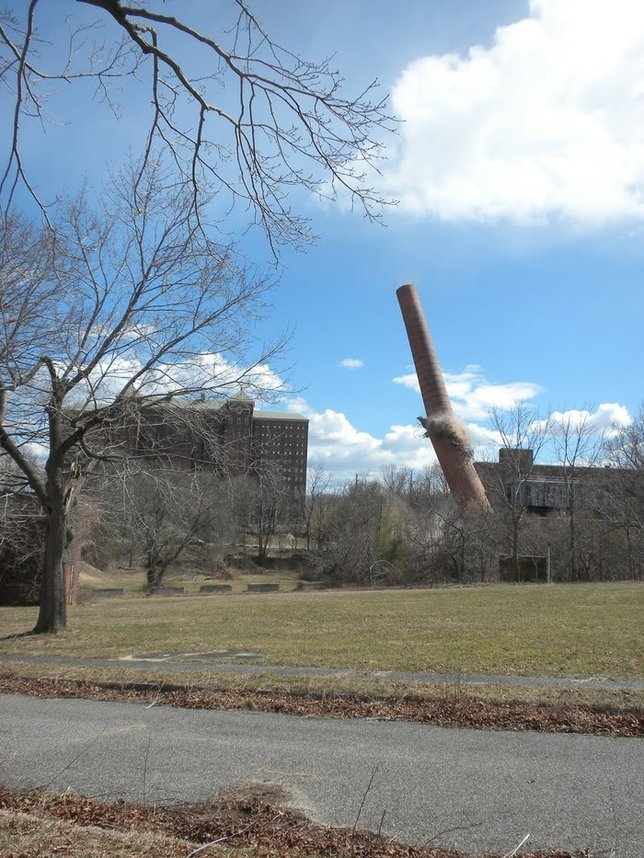 Building 29.1, the smoke stack of the Kings Park Psychiatric Center, was brought down today. Many local residents came to a designated safe viewing area on hospital grounds to watch as the tower collapsed. The implosion removed only one of many buildings which have been the subject of great debate for the town ever since institute was shut down in the mid 90’s.

Removing structures from the site has been complicated by the health risks posed by potentially releasing the large quantities of asbestos used in constructing those buildings, but even accounting for the cost of containing the harmful substances cannot build consensus on what to do with the land. A prior proposal to replace it with high density housing was summarily rejected by residents seven years ago, and little progress has been made on the matter since.

For now, the site remains a striking reminder of the town’s early history. Established in 1885, the Kings Park Psychiatric Center served as a mental health care facility in for 111 years before a dwindling patient population during the late 20th century led to its eventual closure in 1996. The Kings County Asylum, as it was originally called, was revolutionary in its early days, alleviating the stress of the over-crowded, inhumane mental hospitals of its time by providing a cleaner, more spacious hospital. The Asylum was created as a “farm colony” under the belief that growing crops, tending to livestock, and providing for themselves would prove therapeutic for patients.

Having its own source of food and a small power plant for generating heat and electricity, the Psychiatric Center was a self-sufficient institute which could even house much of its own staff and eventually gained its own spur on the Long Island Rail Road. Today, the smoke stack of its old power generator is now gone, but much of the old psychiatric center remains, standing in remembrance of a bygone era.

Check out photos of the tower as it imploded in our photo album.