The fatality rate at Aqueduct Racetrack, Belmont Park and Saratoga Race Course was also below the national average as well. 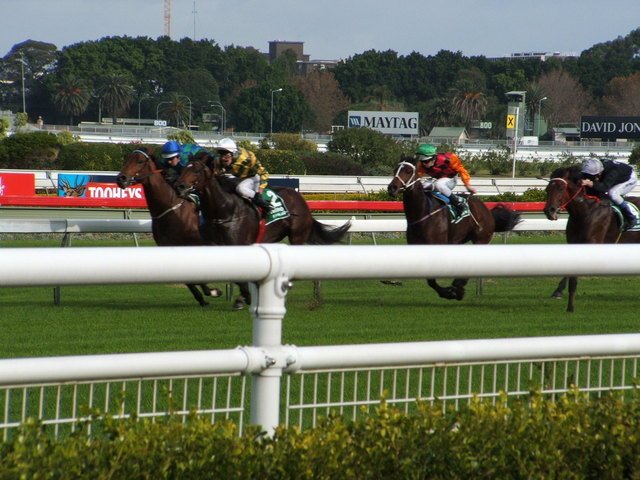 Horses racing on a grass track.

Ozone Park, NY - March 25, 2016 - For a third consecutive year, the number of catastrophic equine injuries at The New York Racing Association, Inc. (NYRA) tracks continued at a rate below the national average, as reported Tuesday by The Jockey Club.
The fatality rate at Aqueduct Racetrack, Belmont Park and Saratoga Race Course in 2015 was 1.1 per 1,000 starts, well below the national average of 1.62 per 1,000 starts in 2015 as measured by The Jockey Club. In 2014, the national fatality rate was 1.89.
Since 2013, under the direction of a new reorganization Board of Directors and a new executive management team led by President and CEO Christopher K. Kay, NYRA has implemented a number of proactive safety initiatives, including the creation of its first Safety Steward, a "Horse Watch" detail, 24/7 horse security coverage, rigorous workout requirements, out-of-competition testing and inspections of trainers' barns and veterinarians' vehicles for unauthorized substances.
In cooperation with Rick Violette, president of the New York Thoroughbred Horsemen's Association, and led by Martin Panza, NYRA's senior vice-president of racing operations, NYRA has been able to institute a number of safety protocols over the past 2 ½ years that have seen clear results.

In 2012, prior to the establishment of the NYRA Reorganization Board of Directors by Gov. Andrew Cuomo and the current management team, the catastrophic injury rate at NYRA was 2.2 per 1,000 starts.

"We have worked diligently to improve equine safety throughout every component of our operations," stated Kay. "We continue to work with NYRA's Safety Steward, Hugh Gallagher, and Martin Panza, as well as our Horse Watch detail, our Equine Safety Committee board members, the state's Gaming Commission and the State's Medical Equine Director to ensure the safety of our equine athletes and their riders."
All three NYRA tracks are accredited by the National Thoroughbred Racing Association (NTRA) Safety & Integrity Alliance. Under the direction of Glen Kozak, NYRA's vice-president of racing surfaces and facilities, NYRA tracks have earned "best practice" ratings in virtually every primary area examined by the Alliance.
NYRA has strongly supported the adoption by New York State of the ARCI model rules governing medications and penalties, and will continue to support the New York State Gaming Commission as it institutes these rules, which include progressive penalties for multiple medication violations and threshold limits for more than two dozen medications.
Additionally, the NYRA Board has expressed its support for national regulation of medications and penalties.
"The New York Racing Association remains vigilant in its efforts to promote equine safety," said Panza. "We continuously review all available avenues to proactively safeguard the integrity and safety of racing operations at all three of our racetracks. This includes securing outside, independent review of the track surface, close consultations with state regulators, and continued dialogue with jockeys, trainers and owners. "