Colby Christina, New York's very own Rising Star has achieved success that has led her to a National Stage at the National Black Theatre Festival. 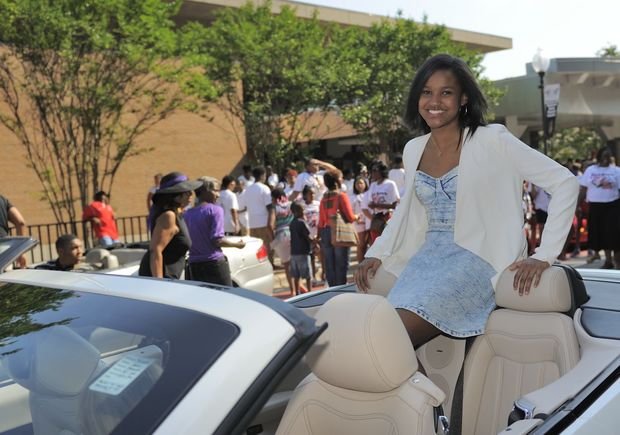 New York, NY - August 21, 2015 - Colby Christina, New York's very own Rising Star has achieved success that has led her to a National Stage at the National Black Theatre Festival.  Colby’s work to date at the age of 14, in the areas of Acting, Dancing, Singing, Community Service, Choreography, and Stem Advocacy catapulted Colby to the National Stage in Winston-Salem, North Carolina for the 2015 Festival. The Theatre Festival was held in conjunction with the City of Winston-Salem at the M. C. Benton Convention Center with host hotels at the Winston-Salem Twin City Marriott and Embassy Suite Hotels. Colby’s dedication and hard work led to her being chosen to serve as Teen Co-Chair and Parade Grand Marshall for the 2015 National Black Theatre Festival.  The Chairs for this years’ festival were Darnell Williams and Debbie Morgan from “All My Children”. Prior to being selected to serve in this prestigious role Colby Christina received the AUDELCO “Rising Star Award” for her role as “Alice” in the Stage to TV Production, “The Liberation of Mother Goose”, written by Playwright Aduke Aremu, Directed and Choreographed by Abdel Salaam, Musical Director Mario Sprouse and Produced by The Restoration Center for Arts and Culture, Youth Arts Academy Director – Peggy Alston – Colby’s Director and Mentor.

The National Black Theatre Festival
The National Black Theatre Festival is the brainchild of the late Larry Leon Hamlin. The National Black Theater Festival (NBTF) was founded in 1989 by Mr. Hamlin in Winston-Salem, North Carolina. As its Executive Director, Hamlin’s goal in creating the Festival was "to unite Black Theatre Companies in America to ensure the survival of the genre into the next millennium". Held biennially since 1989 for six days, the NBTF showcases the best in African-American Theatre. Mr. Hamlin made the transition June 6, 2007 after a lengthy illness and Mrs. Sylvia Sprinkle-Hamlin, the wife of the great Larry Leon Hamlin has since done a excellent job of continuing the Festival with a great support team consisting of son, Larente Hamlin, Mabel P. Robinson, Lawrence Evans, Nigel D. Alston, Arnita Miles and Cleopatra Solomon to name a few. At the 2015 Festival they unveiled the Larry Leon Hamlin Exhibit at the New Museum in Winston-Salem.

Quote from Colby – “It was an honor to serve at one of the nation’s most premiere theatre events celebrating the achievements of giants in the industry of theatre at this year’s festival.  I look forward to continuing to use my God-given talents to the highest levels humanly possible.  The experience served as a reminder that dedication, hard work, persistence, and commitment to your dreams and goals really pay off and will lead me to a world stage I am seeking in Theatre, Film and TV.”

About: Colby Christina
Colby Christina  is a Professional Actor, Singer and Dancer that has trained professionally since the age of two. She has been labeled a formable “triple threat” nationally and internationally. To her credit she has accomplished many “first” in the Arts and in Academia and is the recipient of many awards, citations, proclamations and honors.

Colby Christina has performed at the Billie Holiday Theatre, Center Stage at the Brooklyn Academy of Music, the Museum of Natural History, the Jamaica Performing Arts Theater, and the Waldorf Astoria to name a few. In the Lead Role of “Alice” in the Stage to TV Production, “The Liberation of Mother Goose”, Colby Christina captured the attention of many in the Theatre World and beyond.

Upon receiving the AUDELCO “Rising Star” Award, Colby Christina now joins the ranks of Denzel Washington, Kerry Washington and Sanaa Lathan. Colby is a 14 year old academically astute High School Sophomore that will complete grade 12 in High School at the Age of 16.