McGrath Dodging Debate After Debate, Refuses To Acknowledge His Own Albany Conflict of Interest Scheme. 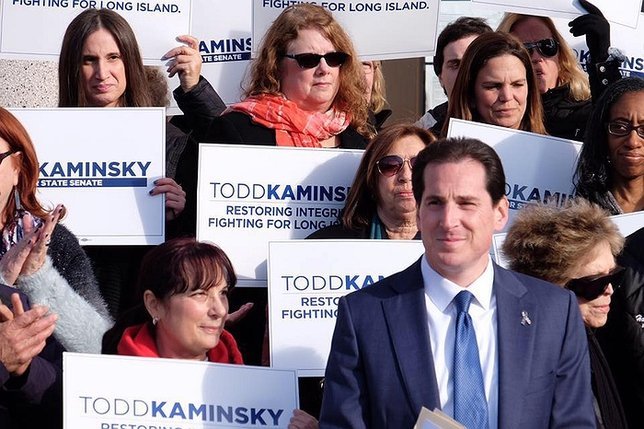 Nassau County, NY - March 23rd, 2016 - Today, Assemblyman and former federal prosecutor Todd Kaminsky called for his opponent, Chris McGrath, to stop hiding from the voters and explain his Albany conflict of interest scheme.
To date, McGrath has turned down every candidate forum - including that of the League of Women Voters - while failing to explain to the voters how he plans to work for the state and sue the state at the same time. So far, McGrath has turned down appearances with the Southwest Nassau League of Women Voters, The Central Nassau League of Women Voters, and the Island Park Meet the Candidates Night.
While McGrath has hid from the voters, he has, quietly, pledged that he not only supports lawmakers accepting outside income, but would to continue his work as a personal injury lawyer if elected to the State Senate. Kaminsky, on the other hand, has never received outside income as a legislator, and is working to eliminate it because no public official should be allowed to use their influence as a politician to benefit financially in private business.
In his career, Chris McGrath has been remarkably successful at suing the taxpayers. In the last decade alone, McGrath has sued state and local governments or public authorities 57 times and his firm has sued them many more. In fact, McGrath has sued - and plans to continue suing - numerous state agencies that he hopes to have oversight over, such as the MTA, LIPA, NYRA, and SUNY.

While McGrath has insisted on the need to take outside income in Albany, he has failed to demonstrate how it’s appropriate to sue an agency while negotiating its budget and conducting oversight.
“I was raised to be honest about where I stood, regardless of whether it was popular or unpopular,” said Assemblyman Todd Kaminsky. “Unfortunately, Chris McGrath has taken the opposite approach - dodging debates to hide where he truly stands. McGrath has ducked debate after debate, refusing to explain his Albany conflict of interest scheme to the voters.
It’s really not surprising, however, that a candidate who has pledged to put his private business interests before that of the taxpayers would avoid interaction with those he’s looking to represent. I guess he follows that old adage: If you don’t have anything good to say…”
“I’m proud of my positions, my ethics, and my work for my community,” Kaminsky continued. “I’d be honored to compare my record of putting the South Shore first up against anyone. That’s why I voted against 110 tax increases and refuse to take outside income. New Yorkers are tired of Albany politicians who hide their true intentions. I’m running for State Senate to clean up Albany once and for all and the people know where I stand. I wish Chris McGrath could say the same thing.”
The 9th Senate District seat became automatically vacant upon the conviction of Dean Skelos in December on charges of bribery, extortion and conspiracy. The Special Election to replace Skelos will take place on April 19th.
As an Assistant US Attorney, Kaminsky successfully prosecuted former Senator Pedro Espada, Jimmy Meng, Michael Grimm, and others.
About Todd Kaminsky
Assemblyman Kaminsky has spent his career fighting for Long Island families and working to end government corruption.

As a federal prosecutor representing Long Island, Brooklyn and Queens, and as acting deputy chief of the Public Integrity Section, Todd took down corrupt elected officials, drug kingpins and other major felons.
In 2014, Todd was elected to represent the South Shore in the New York State Assembly. During his first term, Todd fought for and won ethics reforms, tax breaks, aid for Sandy victims, and a new emergency center at South Nassau Communities Hospital.

Todd authored the most laws by a first-year assemblymember in recent New York State history.