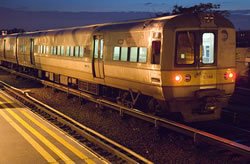 Nassau County, NY - March 21st, 2014 - Nassau County District Attorney Kathleen Rice announced the arrest and arraignment today of three Long Island Rail Road employees on charges of stealing thousands of dollars of copper belonging to the Rail Road and then scrapping the stolen property for profit.
Robert Nowlin, a/k/a Darryl Nowlin, 48, of Brentwood; Paul Holm, 47, of Holtsville; and Joel Quiles, 38, of Wheatley Heights, surrendered to DA and MTA authorities and were arraigned today before Nassau County District Court Judge Scott Siller. Nowlin was charged with Grand Larceny in the 3rd Degree (a D felony), Criminal Possession of Stolen Property in the 3rd Degree (a D felony), Grand Larceny in the 4th Degree (an E felony) and Criminal Possession of Stolen Property in the 4th Degree (an E felony). If convicted of the top charge, Nowlin faces up to 2-1/3 to 7 years in prison. Bail was set at $20,000 cash or bond.
Holm and Quiles were each charged with Grand Larceny in the 4th Degree and Criminal Possession of Stolen Property in the 4th Degree. Bail was set for each of them at $10,000 cash or bond. If convicted of the top charge, Holm and Quiles each face up to 1-1/3 to 4 years in prison. All three defendants are due back in court on March 25.
The defendants have been suspended without pay by the LIRR.
“Stealing material that belongs to the public is not only a violation of the public’s trust, but an act of stealing from, in this case, every rider on the Long Island Rail Road,” DA Rice said. “I’m proud of the cooperation between my office, the MTA Inspector General and the MTA Police Department to hold public employees accountable to the people they serve.”
“Consistent with our commitment following earlier arrests, our joint investigation continued, resulting in three further arrests today,” said MTA Inspector General Barry L. Kluger. “My office has worked with the LIRR, which has made significant improvements to both its inventory and security systems. I wish to thank District Attorney Rice for her effective and vigorous efforts to preserve and protect public assets.”
“The LIRR does not tolerate employees who steal from their employer and from the taxpayers who support our operation," said LIRR President Helena E. Williams. "We are grateful to the MTA Inspector General’s Office and the Nassau District Attorney’s Office for vigorously pursuing these cases.”
An investigation into other LIRR employees stealing wire cable containing copper resulted in the indictment of 15 employees in January 2013. A subsequent investigation by DA Rice’s office, the MTA Inspector General and the MTA Police uncovered today’s three defendants who were also engaged in selling wire containing copper to scrap for profit.
DA Rice said these three defendants, who were also employed by the LIRR’s communications department in a different crew based in Huntington, stole wire cable containing copper that was property of the LIRR between Feb. 15, 2011 and April 15, 2011, and between November and December 2012.
The joint investigation revealed that the defendants would steal copper wire from right of ways, including locations in Nassau County and often while on duty, and use LIRR trucks to transport the wire to their own personal vehicles. From there, they sold the stolen wire for scrap, using their driver’s licenses to carry out the sale of stolen material, and then dividing the proceeds amongst themselves and others on their work gang.
Assistant District Attorney Christiana McSloy of DA Rice’s Public Corruption Bureau is prosecuting the case. Nowlin and Quiles are represented by Kim Lerner, Esq. Holm is represented by James D’Angelo, Esq.
The charges are merely accusations and the defendants are presumed innocent until and unless found guilty.