Family suing the Town of Hempstead Animal Shelter for euthanizing their dogs. 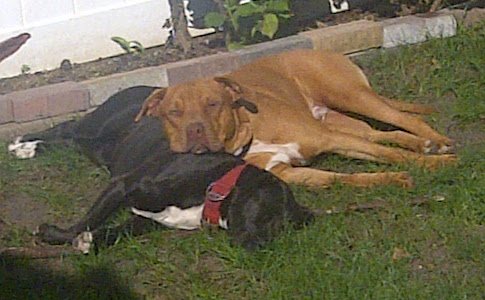 Uniondale, NY - March 21st, 2014 - On Friday, February 15, 2013, Nassau County police responded to a call in Uniondale, concerning two Pit Bulls who were chasing a group of kids. An incident in Lakeview involving Pit bulls three days prior caused  police to send multiple police officers including detectives and a police helicopter. The dogs ultimately ran home and into their owner's residence. Where, after intense pressure from Town of Hempstead Animal Control and due to the heavy police presence the owner allowed the dogs to be taken to the Town of Hempstead Animal Shelter.

On Monday, February 18, 2013 the owners of the Pit Bulls went to the shelter to pay what they thought was going to be a fine and pick up their dogs. To their dismay, they were informed that the dogs were euthanized Saturday morning, less than 24 hours after they were taken by Town of Hempstead Animal Control. Unable to believe this, the family returned to the animal shelter on Tuesday hoping that they were given incorrect information the day prior. They were however, told the same thing. Their dogs had been killed by the Town of Hempstead Animal Shelter.

Later that same week a call was placed to the Nassau County SPCA asking them to investigate. After a lengthy investigation many things came to be known. These two Pit Bulls had a friendly disposition and were well known to the neighborhood to be playful. No one was bitten, or attacked by either of the dogs on that day. Both dogs were in their owner's house and no longer in the street, the owner was not aware that under those circumstances he had every right to keep possession of his dogs and in the absence of a warrant he did not have to surrender them. It is easy to imagine how an owner, who does not speak or read English, could be overwhelmed by this situation, the owner did not understand what he was signing when he turned over of his dogs, the Town of Hempstead apparently made no effort to thoroughly explain and make sure the owner knew exactly what was taking place.

While this may not be customary practice, two pressing questions must be answered. What was the basis for removing these two dogs from their owner's home and why were they killed less than 24 hours later without the protection of a hearing as provided by law?

The NCSPCA receives no public funding, is in no way affiliated with, a subdivision of or funded by any other local, state or national organization and every contribution, large or small, helps to provide the critical care needed to help homeless, abused and neglected animals in Nassau County. The continued success of each program relies entirely on donations. No money given to any other SPCA Organization aids or benefits the NCSPCA. Your generous contribution will help the NCSPCA in all of its efforts.