The teen said he wanted to commit suicide, and would kill his brother so he would not have to be lonely before stabbing him repeatedly. 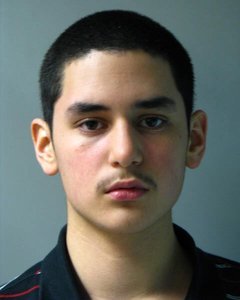 A Williston Park teenager was taken into custody on Friday evening for the attempted murder of his younger brother. According to detectives, Ruben A. Renderos (pictured right), age 18, told his 14-year-old brother that he wanted to kill himself, but before doing so he would kill his brother so he would not be lonely.

Renderos proceeded to pick up a kitchen knife and stab his brother numerous times in the head, chest, and back. The victim managed to call their parents who were not home at the time of the incident, and they in turn called the police. Officers arrived and began a search which led them near Chaminade High School in Mineola; Renderos was apprehended without a struggle on Jackson Avenue. His brother was transported to a nearby hospital for treatment and is listed in stable condition.

Ruben Renderos faces several charges for assaulting his sibling, and was arraigned in Hempstead on Saturday.

In an unrelated incident, the NCPD is on the outlook for an unidentified subject who fired several gunshots in a Baldwin neighborhood on Saturday. Detectives say that a female victim was sitting in a parked car at 6:47 PM when she saw a man in a gray/silver car park nearby, step out of the passenger side of the vehicle, and walk towards her.

Two unidentified males were standing outside a house on the opposite side of the victim’s car, and she saw the subject withdraw a silver handgun from his sweatshirt, then fire it three times in the direction of the two males. The victim tried to drive away, but the subject fired his gun at her car twice and she struck a sign pole and a stoop as she tried to flee the situation.

The subject ran on foot back to the vehicle he arrived in and got into the passenger side; the car then fled westbound.

No gunshot victims were reported at the scene, but the victim suffered a minor head contusion and was taken to an area hospital for treatment. Police are asking anyone with information on the incident to contact them at 1-800-244-TIPS.

The suspect is described as a black male in his twenties, clean shaven with a thin build. He was wearing a gray hooded sweatshirt and blue jeans at the time of the shooting, and is wanted for Reckless Endangerment.