NCPD Officers and local Good Samaritans were honored for their heroic actions that saved the life of Terry Twibell, who cardiac arrest while refereeing a basketball game. 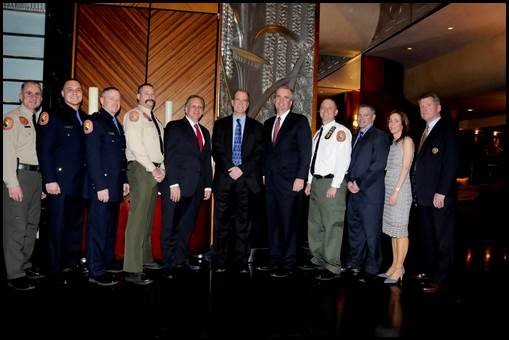 County Executive Mangano states, “We are blessed to have such caring residents as well as professional, hard-working and dedicated members of the Nassau County Police Department. Together, their collective efforts saved the life of Terry Twibell and I commend them for their actions."

On February 1st of this year, Terry was in the middle of refereeing a basketball game at Seaford Middle School when he suddenly went into cardiac arrest. With the help of several spectators, they were able to come to Terry’s aid by implementing CPR and utilizing an AED, which provided a life-saving shock. Nassau County Police Officers and Police Medics arrived on the scene shortly after receiving the 911 call.

Police Officers were able to lower Terry’s core temperature to preserve vital organs and the patrol officers who arrived were instrumental in providing a full emergency escort from Seaford to Winthrop University Hospital in Mineola. Terry joined the County Executive and Police Commissioner at an event in Carle Place to thank all involved for helping to save his life.