Suffolk County Police have arrested a Brentwood man for driving while under the influence of drugs following a crash that critically injured his passenger last night. 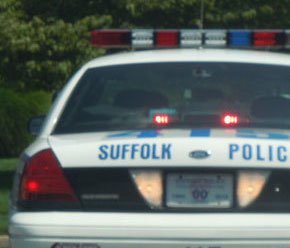 Nissequogue, NY - March 7th, 2016 - Suffolk County Police have arrested a Brentwood man for driving while under the influence of drugs following a crash that critically injured his passenger last night.

Smithtown Park Rangers operating an unmarked vehicle observed a suspicious vehicle parked at the gate to the Short Beach Town Park last night at approximately 10:20 p.m. The Rangers activated their vehicle’s emergency lights and began to approach the vehicle on foot when the operator put the car into drive and sped off, disobeying the commands to stop by one of the Rangers.

The Rangers returned to their vehicle and proceeded to travel south on Short Beach Road where they found the vehicle, a 2011 Nissan Maxima, had crashed and overturned into the woods, knocking down a utility pole.

Julian Arango, 19, of Brentwood, a passenger in the rear seat was transported via Nissequogue Ambulance to Stony Brook University Hospital where he was listed in critical condition. The driver, Alberto Guzman and his front seat passenger, Eric Gomez, 19, of Nissequogue, were transported via St James Ambulance to Stony Brook University Hospital for treatment of non-life threatening injuries.

Guzman, 21, of St. James was charged with Driving While Under the Influence of Drugs and Aggravated Unlicensed Operation of a Motor Vehicle 3rd Degree.

Guzman will be arraigned at a later date. The investigation is continuing. Detectives are asking anyone who may have witnessed this incident to contact the Fourth Squad at 854-8452