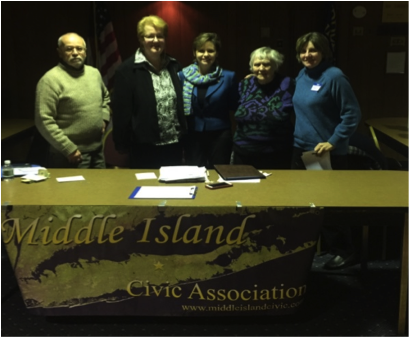 Middle Island, NY - March 3, 2015 - Legislator Sarah Anker was the guest speaker at the Middle Island Civic Association (MICA) meeting on February 19, 2015. Topics covered included an update on the Rails to Trails project, new sponsored legislation to require a warning sign for liquid nicotine at Suffolk County retail stores, and Legislation to create a School Traffic Zone Safety Commission to address traffic accident issues near schools.
“Having been a former resident of Middle Island, I’m aware of the many projects and initiatives the civic has addressed. Middle Island Civic is one of the most proactive and productive civics in Suffolk County,” said Legislator Anker. “With the leadership of former President Tom Talbot and now current President Gail Bailey, I look forward to working with the civic on both the wonderful community projects that enhance the area, as well as tackling the challenging issues that need attention.”
In addition to participating with the civic, Legislator Anker is also a part of the Middle Country Road Task Force, which address issues of concern and focuses on enhancing the character of Middle Island.
"It's always an informative and pleasant night when Legislator Anker visits the Middle Island Civic Association,” said President Gail Lynch-Bailey. “We look forward to working with her on a number of issues impacting the quality of life in our community. Sarah's background in civic advocacy is invaluable as we tackle problems along Middle Country Road and elsewhere."
The Middle Island Civic Association encourages residents of the community to attend civic meetings and to participate in issues that help to preserve, protect, and foster the environmental, economic, historical, educational, and cultural well-being of Middle Island. The civic meets on the third Thursday of each month at 7:00 pm at the Middle Island Fire Department’s main headquarters building. For more information, visit to www.middleislandcivic.com.