All marked State Police vehicles and state buildings are equipped with the devices, and troopers are given comprehensive, special training to use them in emergency situations. 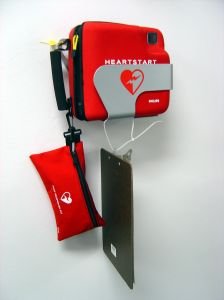 Albany, NY - March 3, 2014 - Governor Andrew M. Cuomo today announced that New York State Police were successful in 15 percent of Automated External Defibrillators (AED) saves for individuals under sudden cardiac arrest – a rate almost double the national average of eight percent.
“In the last several years, hundreds of New Yorkers who went into sudden cardiac arrest were saved thanks to the training, dedication and quick action of the New York State Police,” Governor Cuomo said. “This is just another way that our State Troopers are stepping in to help protect New Yorkers when danger strikes. I commend Superintendent D’Amico and the entire State Police for their continued commitment to keeping New York safe.”
All marked State Police vehicles and state buildings are equipped with the devices, and troopers are given comprehensive, special training to use them in emergency situations. Between November 2007 and January 2014, State Police performed 170 saves using AEDs 1,095 times. State Police members and civilian employees are participating in CPR and AED training this week as part of a continuing recertification process.
On March 1, 2014, a man collapsed while participating in America’s Greatest Heart Run & Walk in New Hartford, Oneida County. Using the AED from his patrol car, a State Trooper was able to help keep the man alive until advanced medical services arrived.
On February 7, 2014, a State Trooper began CPR and attached an AED to a 20-year-old woman who was not breathing in Greenport, Columbia County. Due to his efforts, the young woman regained consciousness and was expected to make a full recovery.
On January 22, 2014, an accident on I-87 left a 25-year-old man unconscious with no pulse after suffering an apparent heart attack while driving in Clifton Park, Saratoga County. The State Trooper who arrived on the scene used an AED and successfully saved the young man’s life.
One of the leading causes of death in the United States is sudden cardiac arrest, which can strike anyone at any time, regardless of age. According to the American Heart Association, more than 350,000 people across the country will suffer from sudden cardiac arrest this year alone.
By giving an electric shock to the heart to help reestablish normal heart function, use of an AED along with early CPR is one of the most effective treatments for restoring a regular heart rhythm. The Division of State Police began training members and equipping all marked State Police vehicles with AEDs in 2007. More than 6,000 employees of the State Police have completed training in the use of AEDs and CPR.
Recognizing that an AED can make the difference between life and death, in 2005, New York State began requiring all public institutions and buildings of the state, including leased facilities, to be equipped with AEDs. In addition, approximately 1,400 volunteer state employee and trained responders are part of the state Office of General Services (OGS) AED program.