Seminal New York heavy metal band Toxic Shock will reunite this March for its first show in over two decades. 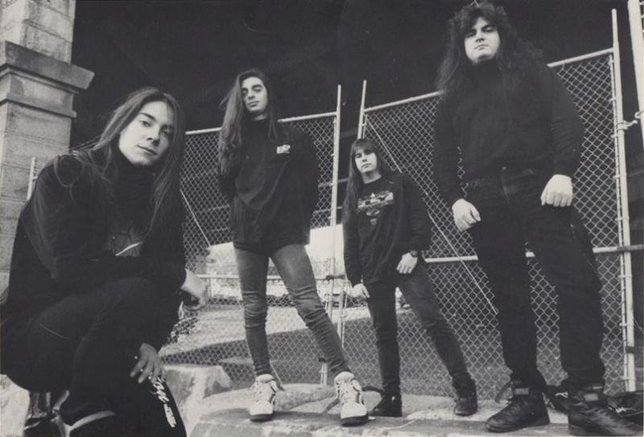 The group, which was started in the late-'80s by a group of bored suburban New York teens and completed upon finding a guitarist in a now-defunct shopping mall arcade, had just begun to find success in the early '90s - recording in a professional studio and signing on with a management company - when tragedy struck.  Guitarist Mark Dagostino, who played an integral part in the pre-internet promotion of the young band, took his life, leaving his bandmates heartbroken and confused.  Toxic Shock attempted to forge on, participating in an ill-fated tour with fellow New Yorkers Nuclear Assault, but Dagostino's death had taken too much of a toll.

"Mark's death put a huge strain on all of us that I don't think we really could quantify at the time," said vocalist Ray Bell.  "Then being out on the road with no funds and a few other issues, it got to a point where the fun and inspiration were gone. We decided to take a break."

The decision to get back together after all these years was spurred by the idea of a reunion show commemorating a local venue.  After a few phone calls, the Toxic Shock guys were encouraged to move forward and renew their passion for playing metal.  They signed on for the reunion show and began working on new material.

"We have always been more like a family than friends," Bell said.  "It's one of the reasons why Mark was never officially replaced.  We know what the other is thinking or going to say about something.  We played together for a lot of years.

"Toxic Shock's reunion will take place Saturday, March 22 at Even Flow Bar & Grill in Bayshore, N.Y. , which is located directly across from the former Sundance club, a staple in the '80-'90s metal scene and site of Toxic Shock's very first live show in 1987.  Fellow New York natives Klank will co-headline the show with Toxic Shock and opening acts Plague Nation and Stainless Leather.

"We are anxious to play for everyone in 2014," said Bell.  "This show is going to be typical of a Toxic Shock show 20 years ago with energy that is just as high as it ever was.  We are as tight as ever, both personally and musically."