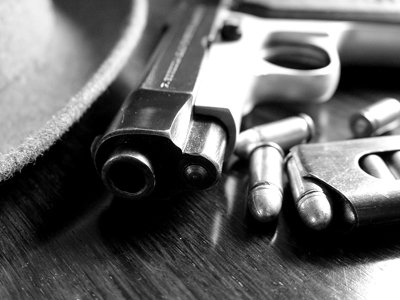 Five people were shot at three different rallies held in observance of the nation’s first Gun Appreciation Day on Saturday, an event intended to bolster support for Second Amendment rights among gun enthusiasts.

The injuries occurred at gun shows in North Carolina, Indiana and Ohio.  Three people were injured at the Dixie Gun and Knife Show held in Raleigh, N.C.  According to police, the gun accidentally fired when it’s owner, a 36-year-old man from Wilmington, was unfastening its case.  The bird shot that was discharged injured three people, including a sheriff’s deputy.  A 54-year-old woman was treated for an injury to her torso, and a 50-year-old man was treated for an injury to his hand.
The chief of police of the North Carolina State Fair told CNN that the incident was an accident, though the Wake County sheriff’s department have yet to determine if charges will be filed against the gun’s owner.
Due to the accident, police prohibited the private sale of any guns for the remainder of the two-day event, nor will there be any future private gun sales on state fairground property.
Another gun show participant is currently in stable condition in after being shot in the arm and thigh by a single bullet, accidentally fired by his business partner at a show hosted by Conrad and Dowell Productions in Ohio.  According to police, the original owner of the gun, a Taurus semi-automatic 9 mm handgun, brought the gun to the show fully loaded despite searches to prevent participants from doing so.
The ATF is currently tracking down the original owner who brought the gun to the show.
Another man shot himself in the hand as he was exiting the Indy 1500 Gun and Knife Show in Indianapolis as he was loading his .45-caliber semi-automatic firearm, according to Indiana State Police.  An investigation has already deemed the shooting accidental, and the 54-year-old shooter is being described as “slightly” injured.
These accidental “Gun Appreciation Day” shootings were not the only incidents of gun-related injuries to mark the event.  According to another report, at least 43 people were wounded or killed as victims of gun violence on Saturday.
Share your report on this article by posting a comment below or by visiting our Long Island Living discussion forum.