At a press conference on February 23rd at the William H. Rogers Legislature Building in Hauppauge, Suffolk County Legislators were joined by environmental advocates and residents to urge Governor Andrew Cuomo to reject the Dredge ...

County officials and environmental advocates joined together to oppose the Army Corps of Engineers final Dredge Material Management Plan, and urged Governor Cuomo to stand with them in opposition.

When the public asked for more responsible alternatives for the disposal of dredge materials, the United States Army Corps of Engineers failed to deliver. The new plan, released in January, outlined the continuation of dredge dumping in the Long Island Sound for 30 additional years without addressing possible beneficial reuses. 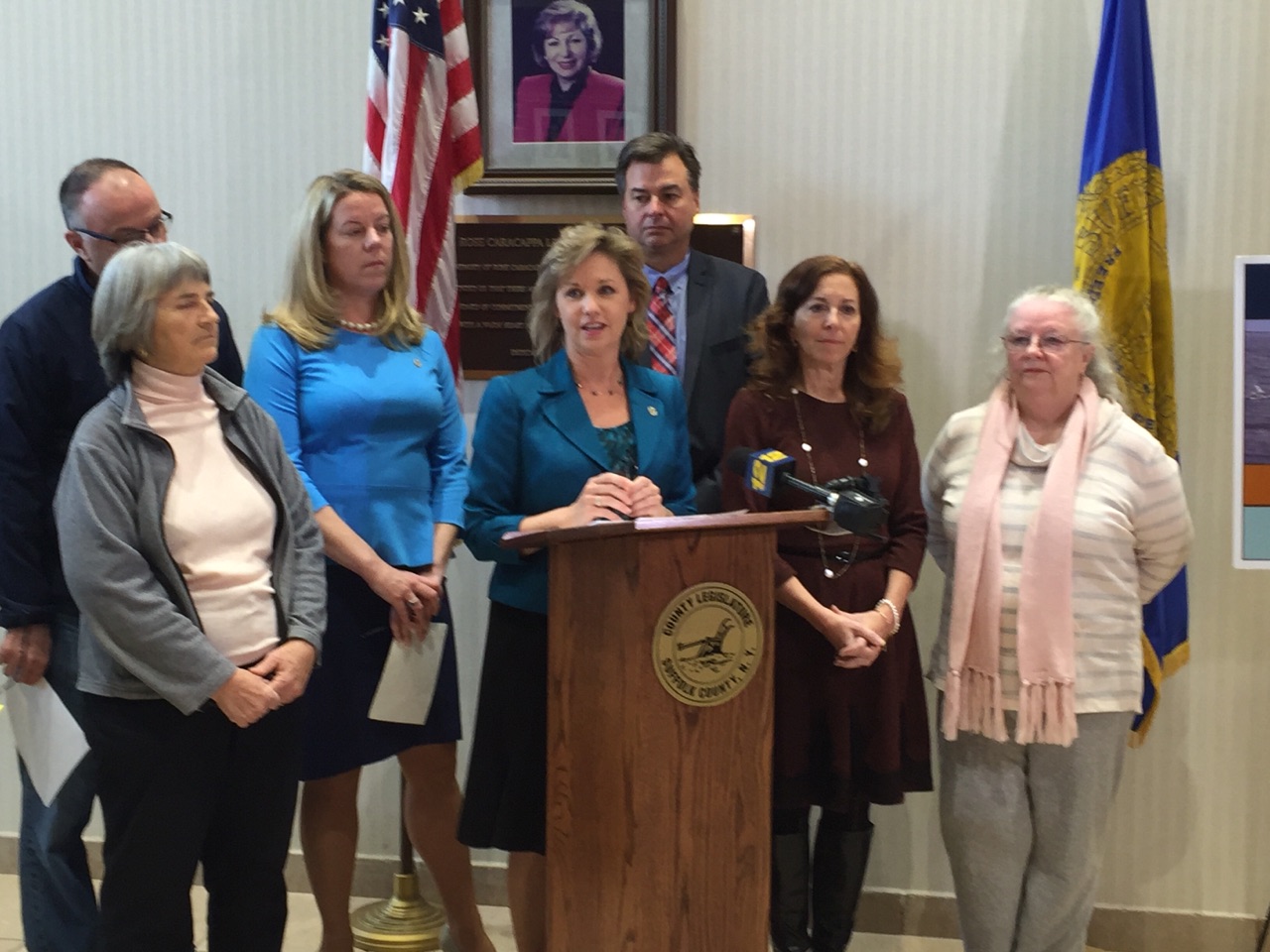 “The Army Corps of Engineers has taken over 10 years and spent over $7 million to identify alternatives to dredge spoil dumping into the Long Island Sound, but have failed to find a solution,” said Legislator Sarah Anker, a strong advocate for environmental preservation and conservation.

“The Dredged Material Management Plan proposed by the Army Corps is a weak excuse to avoid seriously addressing water contamination. Hundreds of millions of dollars have been dedicated to protect Long Island Sound. It is absolutely unacceptable to continue to dump potentially toxic dredge spoils into a body of water that generates up to $36 billion in economic value for Long Island every year. Working to identify beneficial reuses for the dredge material is imperative in order to prevent irreparable harm to Long Island’s environment, health, and economy.”

In February of 2005, the governors of Connecticut and New York requested that the Army Corps of Engineers participate in the development of a Dredged Material Management Plan (DMMP) for the Long Island Sound. The original request asked the Army Corps to research alternative practices with the goal of phasing out open-water dredge dumping, but the final plan fails to reach that goal by outlining an additional 30 years of continued dumping in the Sound.

While routine dredging is necessary to maintain safe and navigable waterways, sediments from river and harbor dredging can contain toxic materials, such as mercury, lead, PCBs and pesticides that pose a threat to the environmentally sensitive Long Island Sound. To date, an estimated 17 million cubic yards of dredged material has already been dumped into the Sound, and the DMMP calls for the dumping of an additional 30-50 million cubic yards of sediment.

Officials and environmental advocates are urging Governor Cuomo to oppose the DMMP plan and to direct the Army Corps of Engineers to phase-out open water disposal. Alternative beneficial reuse approaches – such as using non-toxic dredge material for beach nourishment, habitat restoration projects, and landfill capping – should be incorporated into the plan.

“It’s unfortunate the Army Corps’ plan allows for the continued disposal of potentially harmful materials into the Long Island Sound, despite the strong objections across the board from New York’s elected officials, residents and environmental advocacy groups,” said Legislator Al Krupski, who has been calling for the end of open water disposal of dredge spoils in the Long Island Sound for decades and who last year authored a letter, signed by his colleagues in the Suffolk County Legislature, urging the Army Corps to eliminate the option of open water disposal from the DMMP.  “This is clearly a case of putting the needs of a few above the health of the Sound.  I encourage anyone who is concerned about this issue to join me in calling on Governor Cuomo to do whatever he can to stop this ill-conceived plan.”

“The plan to dump up to 53 million cubic yards of sediment into the Long Island Sound is further proof that the federal government is astonishingly out of touch with the needs of Suffolk County,” said Suffolk County Legislature Presiding Officer DuWayne Gregory (D-Amityville). “Much of the sediment to be dumped in the Sound is dredged material from Connecticut’s industrialized shoreline. Our waters should not be treated as a landfill for Connecticut’s potentially-toxic waste. I call upon the state to reject this plan and protect Long Island’s waters.”

“Over the past 30 years, leaders from both sides of the Long Island Sound have invested heavily in an effort to restore the majesty of this treasure,” said Legislator Kara Hahn, Chairwoman of the Environment, Planning and Agriculture Committee. “Dumping inland dredge spoils that potentially harbor toxic pesticides, heavy metals and industrial byproducts defies the commitment made by Congress, New York and Connecticut a generation ago. I urge Governor Cuomo to reject the Dredge Material Management Plan to ensure we continue moving forward on a mission of restoring the health and economic vitality to our Long Island Sound.”

Legislator William R. Spencer, M.D. (D-Centerport) has also voiced his concerns about the DMMP plan: “Managing our dredge material should not result in compromising the quality and health of the Long Island Sound. Permitting such a large volume of sediment to be dumped into our greatest resource over the next 30 years is not the direction we should move in. Seeking out beneficial reuse for this material to protect our most cherished waterway is the responsible course, and it is my hope that the original bi-state agreement can be adhered to.”

Many residents who have lived on the North Shore their entire lives cannot begin to imagine the negative consequences of continued dredge dumping. Mayor Ed Weiss of Shoreham Village, a long-time resident of the North Shore, reflected on the beauty of the Sound and the need to maintain its integrity: “I remember as a young boy in the mid-1950s standing in chest-deep waters of Long Island Sound seeing the sand below and blowfish swimming around my feet. I stood on Sills Rock off the shore of Shoreham and I could look down 10 feet and seeing the sand there, too. There were blackfish swimming around the base of the rock, and from the shoreline, I was captivated by schools of porpoises frolicking in and out of the water with calves following their mothers. Wouldn’t it be great to bring the Sound back to the way it was then?”

Adrienne Esposito, Executive Director of Citizens Campaign for the Environment, voiced her opposition to the DMMP and urges Governor Cuomo to find alternatives: "We need New York State to stand up against the federal government's plan of using the Long Island Sound as a dumpster. We have come very far in our efforts to protect the Sound and cannot allow this ill-conceived plan to go forward. The Army Corp is apparently looking for cheap and easy disposal options without any consideration for the economic and environmental value of the Sound. Governor Cuomo has the power to say no and veto the plan and that's exactly what he should do!"