Leg. Rhoads and others call upon Governor Andrew Cuomo and New York Rising to extend the deadline for Sandy-victim applicants to submit changes to the scope of project elevations. 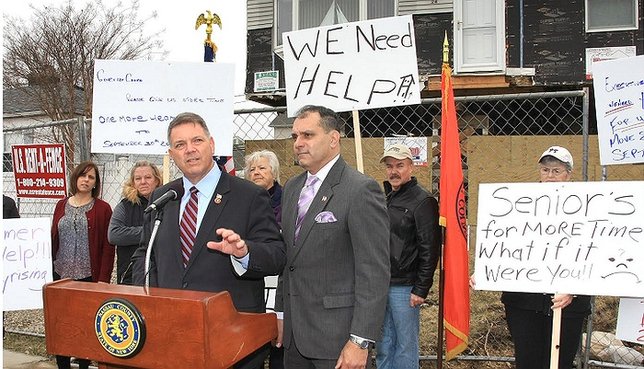 Leg. Rhoads and Town of Oyster Bay Supervisor Joe Saladino were joined by architects, engineers, homeowners, house-lifters, civic leaders, construction workers, and others during press conference on February 23, 2017 calling on Governor Cuomo and NY Rising to extend deadline for Sandy-victim applicants. and more

Without warning, NY Rising imposed a new deadline of March 1, 2017, for applicants to submit elevation changes to NY Rising for reimbursement. More than 4 years after Superstorm Sandy, homeowners are still struggling to return to their homes due to construction and funding delays, and missing this deadline could mean that homeowners will lose their opportunity for reimbursement of unexpected costs related to elevation.

Legislator Rhoads has written to Governor Cuomo and New York Rising to request an extension of the deadline for the benefit of approximately 6,100 homeowners expected to submit elevation change application documents.

Legislator Rhoads: “While I appreciate the daunting task that the Governor’s Office of Storm Recovery and New York Rising has undertaken in assisting affected residents along this journey, the imposition of the upcoming March 1st deadline threatens to derail the recovery process at a time when participants are most vulnerable. I ask that the Governor postpone the deadline for the sake of our residents.”

New York State Assemblyman Brian Curran, 21st AD: "Elected Officials were NOT notified of this "new" imposed deadline and quite frankly this is just plain wrong. I will work with our partners in government to call on Governor Cuomo to resolve this issue and help our Sandy
families rebuild and recover."

Nassau County Legislator Denise Ford: “There are still so many families in various phases of
the recovery process. The March 1st deadline is an onerous burden on many residents, and I ask that Governor Cuomo push it back.”

Nassau County Legislator James Kennedy: “There are so many variables when raising a home, many of which cannot be planned for ahead of time. Residents should be provided with the time to file the necessary paperwork and not be left out of pocket for critical repairs.”

Town of Hempstead Supervisor Anthony Santino: “South shore homeowners in Hempstead Town were slammed by Hurricane Sandy, and neighbors continue to rebuild their homes and
their lives more than four years after the Superstorm. The need to extend the deadline for our affected residents to submit their ‘Scope of Work Change Requests’ and the ‘6100 form’
associated with home elevations is apparent. Thousands upon thousands of Hempstead Town property owners were victimized by Sandy, and our state government should not make them victims again. We are appealing to the Governor to extend the March 1st filing deadline that threatens to slam hard hit homeowners with tens of thousands of dollars in additional costs. It’s time to stand up for Sandy Victims.”

Town of Hempstead Councilwoman Erin King Sweeny: “I thank Legislator Rhoads for his leadership and common sense ideas for South Shore families who still struggle after Sandy. The state shouldn’t impose arbitrary deadlines to cut off funding. Let’s make sure they all get home!”