Governor Cuomo Directs Flags to Half-Staff in honor of a Fort Drum soldier who died in Afghanistan on Monday, February 10. 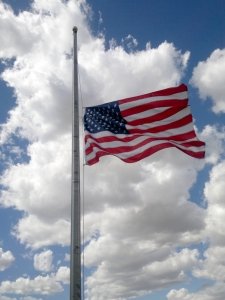 Albany, NY - February 13, 2014 - Governor Andrew M. Cuomo has directed that flags on state government buildings be flown at half-staff on Friday, February 14, 2014 in honor of a Fort Drum soldier who died in Afghanistan on Monday, February 10.

Army Private 1st Class Joshua A. Gray, died from a non-combat related incident at Bagram Airfield. He was assigned to Headquarters and Headquarters Battalion of the 10th Mountain Division and was a native of Van Lear, Kentucky.

"On behalf of all New Yorkers, I extend our deepest condolences to the family and friends of Private 1st Class Joshua Gray," Governor Cuomo said. "We are saddened at the death of this young soldier, and we join with his fellow soldiers at Fort Drum in mourning his passing and honoring his service."