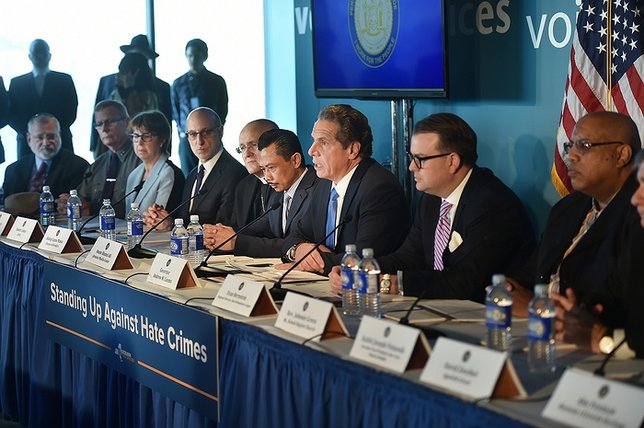 $5,000 reward for any information leading to arrest and conviction for a hate crime.

Albany, NY - February 23, 2017 - Governor Andrew M. Cuomo today announced new actions to combat hate crimes and anti-Semitism across New York State. The measures include a $25 million grant program to boost safety and security at New York’s schools and day care centers at risk of hate crimes or attacks because of their ideology, beliefs or mission. The grant program will provide funding for additional security training needs, cameras and state-of-the-art ​technology, door-hardening, improved lighting and other related security upgrades. The Governor made the announcement following a roundtable with over 50 religious leaders from across the state, including members representing the Christian, Jewish and Muslim faiths.

At the Governor’s direction, the state will also expand its toll-free hotline to include text message capability to report incidents of bias and discrimination. A $5,000 reward is also being made available for any information leading to an arrest and conviction for a hate crime.

"New York must always be the beacon of tolerance and hope for all, and with the recent explosion of anti-Semitism and hate crimes, it is more important than ever before that we do everything in our power to ensure the safety and equal treatment of all New Yorkers," Governor Cuomo said. "Any acts of bias or discrimination will be met with the full force of the law. New York is and always has been a place that celebrates diversity and religious tolerance, and we say to all New Yorkers who feel unsafe – we will always protect you."

The Jewish community has been increasingly targeted by bomb threats and hate crimes in recent months. According to the JCC Association of North America, there have been 69 incidents of bias and discrimination at 54 JCCs in 27 states since January 2017. Yesterday, there was a bomb threat targeting the Anti-Defamation League’s national headquarters in Midtown Manhattan. In addition, across New York State, there was a 31 percent increase in reported hate crimes targeting Muslims in 2016 across New York State compared to 2015 and an 18 percent increase in reported hate crimes against lesbian, gay, bisexual and transgender individuals.

$25 Million Grant Program For Schools, Community Centers and Day Care Facilities
To combat the surge of incidents of hate and intolerance, the state is launching a $25 million grant program to boost safety and security at New York’s schools and day care centers at risk of hate crimes or attacks because of their ideology, beliefs or mission. The grant program will provide funding for additional security training needs, cameras and state-of-the-art ​technology, door-hardening, improved lighting and other related security upgrades. The new grant program will be administered by the Division of Homeland Security and Emergency Services.

Text “HATE” to 81336
In November 2016, Governor Cuomo launched a toll-free hotline to report incidents of bias or discrimination. To date, the hotline has received more than 3,175 calls. Building on its success, New York will expand the Division of Human Rights (DHR) statewide hotline to include text messaging capability.

Today, Governor Cuomo will launch the Hate Crimes Text Line to enable any New Yorker to easily report incidents in their community. Those who have experienced or witnessed bias or discrimination are encouraged to text “HATE” to 81336 with details of the incident, including photo or video documentation. Texts will be monitored by the State Police, who will handle any potential criminal matters. Additionally, cases of discrimination that are covered by the New York State Human Rights Law may be further investigated by DHR. In case of emergency or if you are a victim of a crime, always dial 911. A $5,000 reward is also being made available for any information leading to an arrest and conviction for a hate crime.

The launch of the Hate Crimes Text Line is designed to make it as easy as possible to report incidents across the state and gather critical information to inform statewide response efforts. With aggregate data on the frequency and location of incidents, officials can better map activity, target response efforts and deploy resources effectively.

Protecting Civil Rights and Combatting Hate Crimes
Today's announcement builds on Governor Cuomo’s recent actions to combat bias and discrimination. In November, Governor Cuomo directed the State Police to create a new Hate Crimes Unit to investigate and offer assistance to other law enforcement agencies investigating potential hate crimes. The Governor will also advance legislation to expand the state Human Rights Law to protect all students and establish the nation’s first public/private legal defense fund to ensure all immigrants, regardless of status, have access to representation

If you have been the victim of a crime, you may contact the New York State Office of Victim Services, which funds 223 programs statewide, providing direct services, such as crisis intervention and counseling, to victims of crime, including hate crimes. Those programs also can help any crime victim apply for compensation and other assistance from the agency, which is a safety net for individuals who have no other resources. Individuals seeking help from OVS also can search for a service provider online. For more information, please visit: www.ovs.ny.gov.

Under state law, a person commits a hate crime when one of a specified set of offenses is committed targeting a victim because of a perception or belief about their race, color, national origin, ancestry, gender, religion, religious practice, age, disability or sexual orientation, or when such an act is committed as a result of that type of perception or belief. Hate crimes can be perpetrated against an individual, a group of individuals or against public or private property. Also under state law it is illegal to discriminate on the basis of race, national origin, religion, ethnicity and many other protected classifications.

New York has the proud distinction of being the first state in the nation to enact a Human Rights Law, affording every citizen "an equal opportunity to enjoy a full and productive life." The New York State Division of Human Rights is the agency in charge of enforcing this law, which prohibits discrimination in employment, housing, public accommodations, credit, and other jurisdictions, based on age, race, national origin, sex, sexual orientation, marital status, disability, military status, and other specified classes. For more information about the Human Rights Law and the work of the agency, please visit the Division of Human Rights’ website at www.dhr.ny.gov.