This year's class is a mixture of men and women who have excelled at soccer on Long Island and beyond. 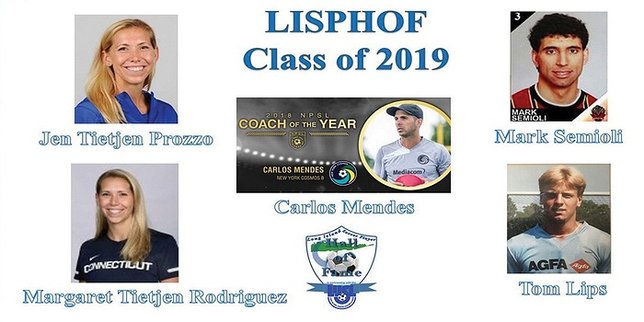 Long Island, NY - February 20, 2019 - The Long Island Soccer Player Hall of Fame will honor its Class of 2019 in its 7th annual awards gala to be held this Saturday, February 23 at the Huntington Hilton on Route 110 in Melville, starting at 7:00 pm. This year's class is a mixture of men and women who have excelled at soccer on Long Island and beyond:
“I created the Long Island Soccer Player Hall of Fame to honor our past. Too many parents and kids on Long Island currently playing soccer have no idea of the amazingly rich history we have here on Long Island! The Class of 2019 is just the most recent example of the extraordinary players that we have produced on Long Island that we should all be incredibly proud of,“ said Long Island Soccer Player Hall of Fame founder, Kevin L. McCrudden.
Anthony Maresco, President of the Long Island Junior Soccer League (LIJSL) with clubs in 103 communities across the island, stated, “The LIJSL congratulates all of the Long Island Soccer Player Hall of Fame (LIPHOF) inductees. We are honored to be a part of the LIPHOF as it allows us to reconnect with the inductees who began their soccer careers in the LIJSL.“
“Each of these inductees have earned the right to become Hall of Famers on and off the field,“ McCrudden added. “They each have unique stories that are told each year at the induction gala and inevitably, the connections within the room literally connect dozens of people with shared soccer histories that we didn't know before. Connecting Long Island's soccer past with its future is more than I could have ever imagined and it happens almost every year right before our eyes. It's always such a magical evening.“
With over 100,000 youth soccer players––both boys and girls––and more than 25,000 volunteers, the non-profit Eastern New York Youth Soccer Association (ENYYSA) stretches from Montauk Point, Long Island to the Canadian border. Members are affiliated with nine leagues throughout the association, which covers the entire state of New York east of Route 81. ENYYSA exists to promote and enhance the game of soccer for children and teenagers between the ages of 5 and 19 years old, and to encourage the healthy development of youth players, coaches, referees and administrators. All levels of soccer are offered––from intramural, travel team and premier players as well as Children With Special Needs. No child who wants to play soccer is turned away. ENYYSA is a proud member of the United States Soccer Federation and United States Youth Soccer Association. For more information, please log on to http://www.enysoccer.com, which receives nearly 300,000 hits annually from the growing soccer community.