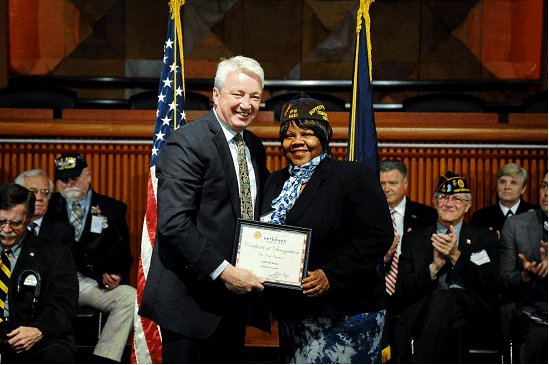 Suffolk County, NY - May 18, 2018 - On Tuesday, May 15, 2018 the New York State Senate inducted the 2018 New York Veteran honorees into the State Senate Veterans' Hall of Fame. This year Senator Phil Boyle selected Commander of the Suffolk County VFW, Sabrina Lacy as the honoree representing the 4th Senate District.
“It was a true privilege to name Sabrina Lacy as my nominee,” said Senator Boyle. “Sabrina served with distinction and received numerous medals and commendations while attaining the rank of Sergeant during her 20 years in the United States Army. It was my honor to stand with Sabrina at the induction ceremonies in Albany and present her with her certificate of recognition. Congratulations Sabrina!”
The New York State Senate Veterans' Hall of Fame was created to honor and recognize outstanding veterans from the Empire State who have distinguished themselves both in military and civilian life. Their meritorious service to our nation deserves the special recognition that only a Hall of Fame can provide, as a fitting expression of our gratitude and admiration.
Sabrina Lacy is the first black woman to hold the position of Suffolk VFW Commander. She has dedicated her life to helping veterans throughout our county and state.
Sabrina has two daughters, one of whom serves in the US Army and the other who attends nursing school.