NYSDOT Commits to Major Fix of NY878 During Questioning with Sen. Kaminsky 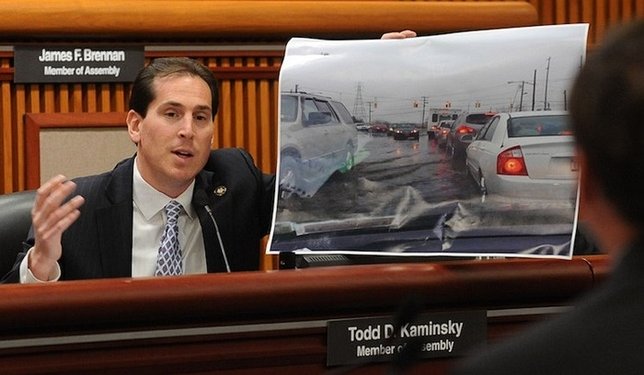 When Kaminsky asked Commissioner Driscoll whether NYSDOT was working on a plan for the constantly flooded and jammed roadway, the Commissioner responded that his agency would soon unveil a multi-million dollar plan to completely overhaul NY878. According to Commissioner Driscoll, an announcement will be coming soon that will reveal the timetable and scope of the project, but he confirmed that the tens of millions of dollars the state is willing to spend will be the largest and most comprehensive overhaul of the road to date.

“My office regularly receives complaints about the flooding and congestion that plague NY878, and I am thrilled to receive this major commitment from Governor Cuomo’s administration. As a major emergency evacuation route for tens of thousands of residents, NY878 is one of the most important roads on Long Island, and its overhaul is a much-needed safety upgrade. I look forward to hearing specifics on what this project will involve and will continue to push for the necessary improvements to ensure the safety of my constituents.”

Additionally, the following statements were issued:

Hempstead Town Supervisor Anthony J. Santino: “For years community leaders, government officials and neighbors have been united in the fight to rehabilitate the Nassau Expressway, also known as NY 878,” stated Santino. “I want to thank Senator Todd Kaminsky for securing a commitment from New York State to fund a major renovation project for this pothole riddled and flood-prone roadway. The road rehabilitation project will help reduce traffic congestion and make this thoroughfare safer for residents of the Five Towns and surrounding areas.”

Legislator Howard J. Kopel: “I am delighted that New York State plans to spend some significant money to address problems with this critical infrastructure. I look forward to hearing more details, and I plan to work with Senator Kaminsky and state officials to ensure that  the health and safety needs of our residents are met.”

Cedarhurst Mayor Benjamin Weinstock: “DOT's commitment to begin the storm hardening work presently being engineered for 878 is a big step in the right direction for the residents of Cedarhurst and the surrounding South Shore areas.  We depend on 878 and Peninsula Boulevard as our only coastal evacuation routes.  This is long overdue and we hope that this will continue with the completion of the construction of the balance of 878 into Queens.”

Special mention must be made to former Assemblyman Phil Goldfeder for his years of advocacy on this project.

Obtaining State funding for significant improvements to NY878 has been a top priority of Senator Kaminsky for years. Kaminsky has repeatedly requested the State overhaul NY878, including writing letters to the NYSDOT and publicly questioning the commissioner last year. Approximately 40,000 vehicles travel along NY878 daily, making it one of the South Shore’s major transportation arteries.  In addition to connecting drivers to both New York City and New York’s largest airport, John F. Kennedy International, NY 878 also serves as a designated evacuation route for ambulances, fire vehicles, police cars and South Shore residents in the event of a natural disaster.  The roadway is one of only three points of evacuation for tens-of-thousands of residents of the Long Beach Barrier Island, and was heavily utilized during superstorm Sandy as an evacuation route as well as a throughway for emergency goods and services.

You can view the video here.