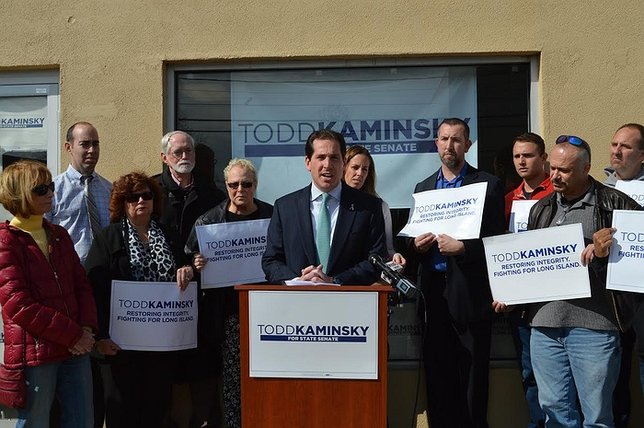 Assemblyman Todd Kaminsky with a group of supporters.

Photo by: Office of Todd Kaminsky

South Shore, Long Island - April 13, 2016 - Today, Assemblyman and former federal prosecutor Todd Kaminsky was joined by parents and teachers from across the 9th State Senate District to denounce Chris McGrath for relying on $1.2million from pro-Common Core, anti-Long Island special interests to fund his fledgling campaign. Assemblyman Todd Kaminsky has been a fierce advocate against Common Core, standardized testing, and anti-teacher measures as a member of the Assembly. Worse, the pro-charter school, pro-Common Core Independent Expenditure money poured into the Senate race immediately after the Senate GOP doubled funding for charter schools in the recent budget agreement. Ending quid-pro-quos like this is the exact reason Todd Kaminsky is running for Senate.
While Chris McGrath has been cozying up with pro-Common Core special interests, Assemblyman Todd Kaminsky has been fighting on behalf of our children, parents, and teachers by leading the fight against Common Core. Kaminksy’s education agenda includes enabling parental right to opt-out of Common Core, drastically reducing test length and decoupling teacher evaluations from student test results.
Assemblyman Kaminsky has also successfully ended the GEA and delivered record school funding for Long Island schools. The GEA, which will now be a thing of the past, was costing Nassau County schools over $45million dollars.  Because of Kaminsky’s advocacy, Southwest Nassau County schools will receive an $18million increase in funding this year.
Assemblyman Todd Kaminsky said: “My mother was a local school teacher on the Shore Shore and I know how hard she worked to ensure every child had an opportunity to succeed. Now, as a parent, I want that same experience for my son -- not corporate-backed Common Core standards that force our children to take hours of tests and handcuff our hard working teachers. That’s why I’ve fought against Common Core and have delivered an $18million increase in school funding so that our children will grow as individuals and have the skills they need to grow into adulthood.”
“It is abhorrent that chris McGrath would join with the pro-Common Core, anti-teacher, anti-public education special interests over Long Island schools," Kaminsky continued. "Chris McGrath, obviously cares more about campaign cash than our children’s education. Unfortunately, it’s not surprising that McGrath and his backers in Albany would engineer a quid-pro-quo backroom deal and accept this support just days after the Senate GOP, at the 11th hour, gave tens of millions of new dollars to charter schools in the state budget. The groups that are fueling McGrath’s campaign want nothing more than to pour Long Island school aid into New York City charter schools. Our students, teachers, and parents deserve better. Chris McGrath should immediately denounce these ads and demand they are taken down.”
Marla Kilfoyle, a teacher and the Executive Director of NYSBAT said: “Teachers want what is best for your children -- and Chris McGrath and his Common Core allies are not what is best for your children or our schools. He and his allies are anti-teacher, anti-public education, and anti-union. Every child learns differently and Common Core does nothing but take away our ability to best help our students. We need Todd Kaminksy and his record of fighting for education in the State Senate and anyone who cares about our schools should vote for him on April 19th.
Opt-out movement leader and local public school parent Jeanette Deuterman said: “Todd Kaminsky is the only candidate that will support our public schools and public school children. Todd has taken an active role to fight back against the growing tide of corporate reforms in our classrooms, introducing four bills that will set us on the right course towards needed changes. By accepting unprecedented donations from Students First, Chris McGrath has chosen the side of the corporate reformers looking to dismantle our public education system. If you stand for public education, then you must stand with Todd Kaminsky on April 19th.”
The 9th Senate District seat became automatically vacant upon the conviction of Dean Skelos in December on charges of bribery, extortion and conspiracy. The Special Election to replace Skelos will take place on April 19th.
About Todd Kaminsky
Assemblyman Kaminsky has spent his career fighting for Long Island families and working to end government corruption. As a federal prosecutor representing Long Island, Brooklyn and Queens, and as acting deputy chief of the Public Integrity Section, Todd took down corrupt elected officials, drug kingpins and other major felons.
In 2014, Todd was elected to represent the South Shore in the New York State Assembly. During his first term, Todd fought for and won ethics reforms, tax breaks, aid for Sandy victims, and a new emergency center at South Nassau Communities Hospital. Todd authored the most laws by a first-year assemblymember in recent New York State history.